The “road of the future” coming to Wayne 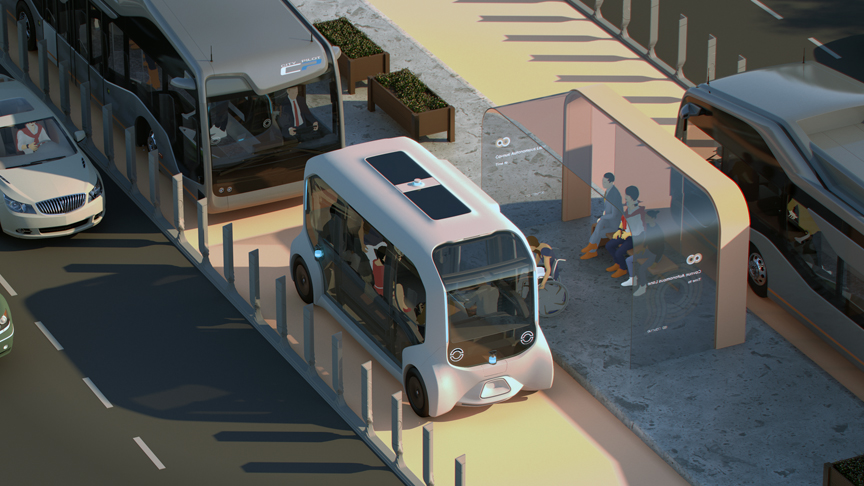 By Carolyn Marnon – The majority of motor vehicle crashes involve human inattention or error according to the NHTSA (National Highway Traffic Safety Administration.) The road of the future could change those statistics.
On August 13, Trevor Pawl, Chief Mobility Officer of the State of Michigan’s new Office of Future Mobility and Electrification, announced along with other federal, state and local partners, that SE Michigan regional transportation is going to be transformed. Michigan is doing something that has never been done that will change the world-creating the road of the future. “Today,” he said, “we begin building the road of the future: a self-driving vehicle corridor between Detroit and Ann Arbor.”
The proposed corridor will improve access to transportation for those who have had trouble accessing it in the past. Pawl proclaimed that Michigan will be an early leader in a new way of transport, one that has a smarter and safer infrastructure for the next generation.
Michigan Governor Gretchen Whitmer said that in 2019, Michigan had record-breaking investments in next generation automotive, advanced manufacturing and cutting-edge technology. Michigan will close transportation gaps with the ambitious project of building the “world’s most sophisticated roadway.”
“With opportunity also comes responsibility to advance our State’s technology and automotive landscape in a way that also has the potential to improve the quality of life for countless individuals in our State that includes our workforce, small business owners and residents in communities all along the corridor,” said Gov. Whitmer.
Two years ago, Ford Motor Company Chairman Bill Ford stood outside Michigan Central Station and announced its purchase with the intention of restoring it and making it a hub of mobility for Corktown and Detroit. He wanted to make transportation more convenient and help restore a Detroit icon to beyond its former glory.
“When I announced the purchase of Michigan Central Station, I laid out a vision for a mobility corridor that would span from Detroit to Ann Arbor,” Ford said. “And my vision was that this corridor could serve as a proving ground where Ford and partners could design, test and innovate on services and solutions that would connect communities and provide affordable and equitable transportation.” The vision is to build for the world we are moving into.
Detroit Mayor Mike Duggan commented, “Today is a day that I think nobody would have predicted five years ago.” People thought the expertise was in Silicon Valley and Northern California. He said that Waymo is installing self-driving systems in vehicles at a Detroit plant nearby. According to Duggan, Michigan Avenue has the width needed to provide this futuristic transportation corridor.
Ford is investing $750 million and 5000 people into Michigan Central Station to design and engineer the vehicles of the future. Now, there is a need for a place to test those vehicles.
No longer will the road of the future be considered science fiction. It will be coming said Jonathan Winer, co-founder and co-CEO of SIP (Sidewalks Infrastructure Partners.) He and his partners have formed Cavnue, the company that will work with MDOT and other stakeholders to implement this project. The interstate system, launched in 1956, changed how people across the US connected with each other through a high-speed, high-capacity system without stoplights and with exits spaced at least a mile apart. The CAV-C (Connected and Autonomous Vehicle Corridor) is the next major transportation infrastructure move to the future.
The project is expected to begin with connected buses and shared mobility vehicles such as vans and shuttles, later expanding to additional types of CAVs like freight and personal vehicles. Connecting Detroit to Ann Arbor with communities along Michigan Avenue and Interstate 94 that link to destinations like University of Michigan, Detroit Metropolitan Airport and Michigan Central Station is the vision.
Phase One of the CAV-C project will focus on testing technology and roadway design and exploring different viable financing models to determine the feasibility of the project. This phase is expected to last 24 months, with construction and implementation part of future phases.
During the feasibility analysis in Phase One, work will focus on technology testing and roadway design, and exploring different financing models with an aim toward determining project viability from both a technology and business perspective. Subsequent construction and implementation would be part of future phases of the project, to be determined following the initial 24-month period.
According to a Fact Sheet produced by Cavnue, “While billions have been invested into developing on-vehicle technologies – including advanced driver assistance systems (“ADAS”) and fully autonomous driving solutions – a small fraction has been spent on developing infrastructure to support and enhance advanced roads. Cavnue is developing and integrating technologies that will power the world’s most technologically connected roads. Cavnue’s approach is centered around creating a digital model of a roadway that analyzes and optimizes road conditions in real-time, shares information, and provides proactive guidance to vehicles and drivers. This supports enhanced safety, efficiency, and road operating environments.”
Moving forward, Cavnue will work with MDOT to establish five Working Groups to strategically address key dimensions of the project. Once established, those groups are expected to deliver a set of goals within six months.
The City of Wayne and its residents would most likely be interested in the Routes, Community Engagement, and Economic Development Working Groups since Wayne will be along the futuristic corridor. The six-month deliverables of this group include:
• Finalize a set of key points of interest and route options.
• Develop a process for community engagement with residents along and affected by the Project, including evaluating the need to engage an advisor or firm with a track record of success in Michigan community engagement.
• Provide an initial analysis of critical factors on potential routes, including traffic patterns, demographics, physical characteristics, utility and contamination surveys, redevelopment, and land assemblage activities.
• Identify key economic development objectives and opportunities.

12-Month deliverables include:
• Begin an ongoing community and public engagement process to garner feedback and align on support by stakeholders.
• Based on engagement with stakeholders, identify key opportunities for encouraging economic development.

24-Month deliverables:
• Complete Phase 1 community engagement, supporting alignment with residents along and affected by the Project.
• Complete analysis of economic development opportunities.
• Finalize a route and phasing proposal for the Project, drawing on civil engineering, environmental, and other key analyses.
Intelligent vehicles are here. Autonomous vehicles are coming. Michigan is getting ready.
“This is great news to have Ford Motor Company and Google working together to create the road of the future and to have Wayne be in the middle of it all,” said Wayne Mayor John Rhaesa.