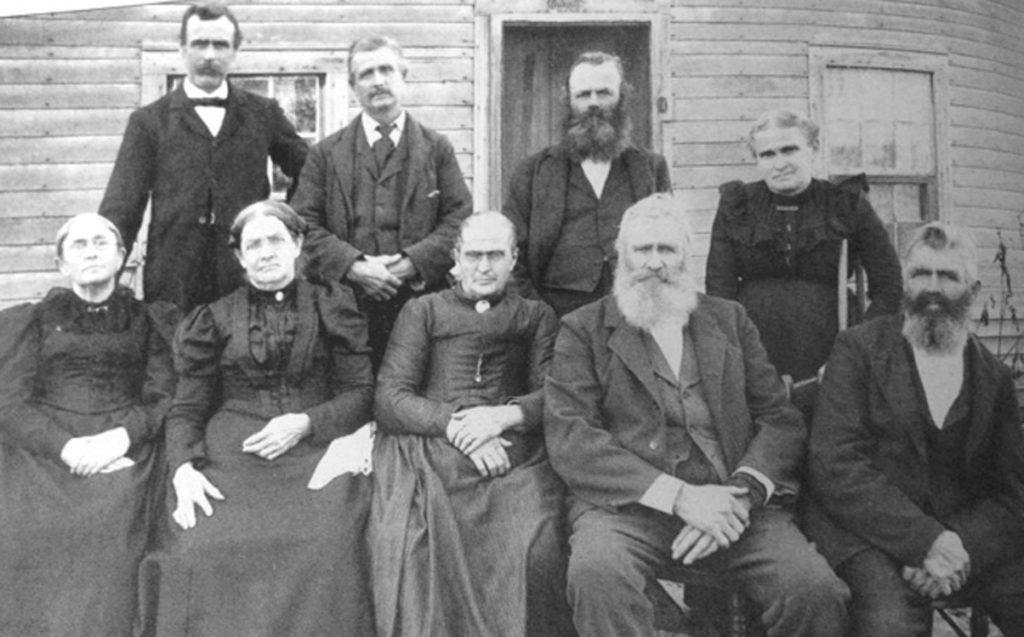 Early Wayne settlers, Benjamin and Electa Hix, came to Wayne in 1836 and raised their family on Michigan Avenue and  Cogswell Road. This picture of their nine children includes John Hix who the road east of Hannan is probably named after.

By Darlene Hawley – In my last article I wrote about the founder of our community, Ezra Derby, who bought 80 acres and the log tavern built in 1824 by George M. Johnson. Derby proceeded to “grow” the community by building a saw mill, a home, store and blacksmith shop and then in 1835 subdividing a part of his 80 acres into 15 lots in the area. Soon other important pioneers of our community (James Street, James Krider, Ammon Brown, Glode Chubb, Rufus Brown and Col. Joshua Howard to name a few) came and bought land which they subdivided and sold or settled on themselves. Our community was on its way. In 1834 Governor Porter appointed Ezra Derby as Justice of the Peace of the budding village and we had our first officer.
By 1869 our community had a population of about 800 people. On April 12, 1869 the village voted to become incorporated. By Act of the State Legislature, the Village of Wayne was established within the area of one square mile. The boundaries were what is now Glenwood on the north, Annapolis on the south, the C&O Railroad on the west and Fourth Street on the east. (Today we are six square miles bounded by Glenwood, VanBorn, Hannan. and Merriman.) During this election held at the Union Hotel, William R. Corlett was elected the first president of the Village Council, William M. Hastings recorder (clerk), and Ammon Brown treasurer. Trustees were Jacob Bunting, Fredrick Marker, Dr. Thomas Morrison, Israel Bell and John Palmer. After meeting in rented rooms for a number of years, the Council decided to have a Village Hall built. In November of 1878 they held their first meeting in the newly constructed brick building on the Public Square. That building still stands today as our Historical museum.
By 1869 the last vestiges of the pioneer settlement had disappeared except for one or two early log houses, long abandoned. For many years one could still be seen near Michigan Ave, east of the Village. The grist mill had been replaced by the modern “Flouring mill”, the spinning wheel and loom had been hidden away to be discovered years later as decorative “atmosphere”, and beet sugar at 10 cents per pound was used rather than the maple sugar made at home.
Although a few families on farms still “tapped” their maple trees each spring, collecting the sap to boil down for syrup and sugar, most were now buying syrup from Bunting’s Store, T.P Gorham’s or Hosie & Stellwagen’s for 75 cents per gallon. Here they bought their flour for $5.50 per barrel and paid 75cents for 25 pounds of buckwheat flour for their pancakes. “Hamburg” (or hamburger today) appeared in the meat market in the late 1870”s.
The one room log schools were replaced by the red brick or white frame buildings. Some of the log schools throughout the area were remodeled and used as part of a house.
The roads had improved over the years. By 1869 Michigan Ave. (the old Sauk Trail or Chicago turnpike) was laid with gravel and was often referred to as “the Gravel”. (It was 1925 before Michigan Avenue would be paved.) After incorporating, the Village began installing street lamps and laying wooden sidewalks. By 1896 only cement sidewalks were laid.
In the Village, homes and businesses mingled on the main streets. On Michigan Avenue, Monroe and Newberry streets, homes were scattered among the stores. Some of Wayne’s finest homes were on Monroe (now Wayne Rd.) south of the Michigan Central railroad tracks. Main Street became the real street of homes. It was a quiet street with shade trees on both sides, extending from the Town Square from east to west, connecting the “Gravel” at both ends. Park, Elizabeth, Norris, Brush, Sophia and Clinton streets became filled with homes. It was not until nearly 1920 that land was subdivided north of the river or outside of the original Village limits on the south and west sides.
By 1924 the Village population had grown to 2500 and in 1926 it was shown that “nearly all the streets were paved and sewers installed”. It was a community of businesses, homes, an excellent school system, churches of nearly every denomination, a developing extensive park system and police and fire protection. A real metropolitan Village!!!
And Wayne continued to grow! In 1969, 100 years after our little Village was incorporated, the community came together “to celebrate the hundredth anniversary of this organization of local government”. Civic groups, clubs and organizations formed committees and planned a myriad of events to be held July 24th through August 2nd in Wayne. Hundreds of people were involved in this endeavor to pay homage to our early settlers and the history of our community. It was a spectacular success with a huge parade, sidewalk sales, ceremonies, displays, hospitality centers, costumes, ox roast, carnival, square dance in the street, box lunch picnics, kiddie activities, bands, dramatizations and much much more. Thousands of people attended and were fortunate to be a part of this historic occasion. What a celebration!!!!
Many of you may recall this event even though the years have slipped away. (Where does the time go ???) In just two years we will have the opportunity to celebrate the anniversary of 150 years since the incorporation of our community. Talk is beginning of plans for this upcoming historical date. It’s sure to be something we all want to be a part of!!
(Information for this article was taken from the history section of the Wayne Centennial Book by Mildred Hanchett.)