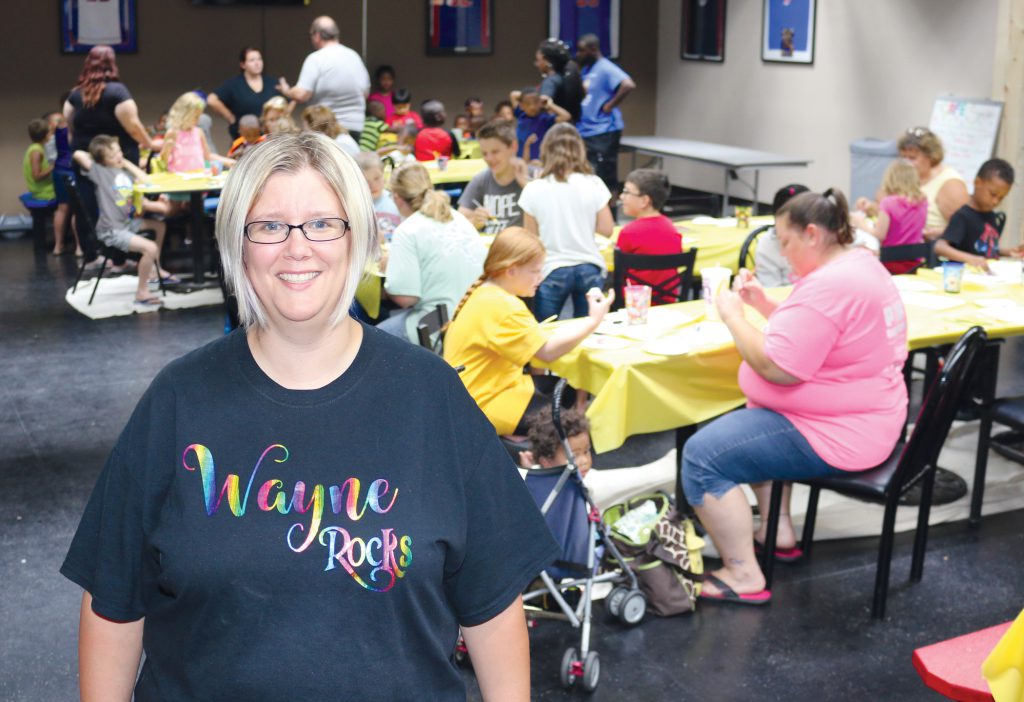 By Carolyn Marnon – Not only does Wayne rock because of the awesome concerts in the park that the Wayne Rotary has lined up for Goudy Park this summer, but Wayne rocks as a result of the kindness movement that was put into motion locally by Bernadette Brock.
It was a simple rock that started it all. Bernadette’s son, Grayson, suffers from anxiety. While playing inside a downriver McDonald’s play place last month, Grayson found a painted rock. He went from being stressed out to happy and relaxed. According to Bernadette, he wouldn’t let go of the rock.
Grayson wanted to paint his own rocks. The next day, the Brock’s painted 150 rocks. They went to hide the rocks throughout Wayne and later that night, Bernadette started the Wayne Rocks Facebook page. She had tried to get a couple other people who were active in the community to do it. Since they didn’t have the time, she just did it.
Soon, others were painting their own rocks and hiding them. It was bringing people together. One day, Bernadette says, 60-80 people were out looking for rocks. Many find the rocks and then rehide them. They can be in parks or at businesses. It’s a great way to highlight Wayne. Bernadette believes there is a lot of good in Wayne and this project brings people together.
When the Facebook page hit 500 likes, she provided 10 starter kits to random group members. The kits consisted of 30 pounds of rocks, some different paints, 25 paint brushes and a bottle of sealer.
There are contests to also get people involved. One contest had people guessing how many rocks were in a jar. Another had people looking for a yellow Lego rock.
A table at a recent concert in the park was available for rock painting. Every Monday from 10:00 a.m.-noon, you can go to HYPE recreation center on Howe Rd and paint rocks. All supplies are provided. All you need to bring is enthusiasm. All ages are welcome! Bernadette is grateful to the businesses who donated gift cards so she can buy more paint and brushes to share with the community.
Bernadette was touched by a person she came into contact with in a nearby community who was touched by a rock. This person saw the Wayne Rocks shirt she was wearing and asked her how she knew about Wayne Rocks. He/she had found a rock that said “you are loved” on it and went on to explain they suffered from bi-polar disorder. It provided a message they really needed to hear at the time.
“It’s about giving and enjoying the community,” said Bernadette. Kids are out and about and being active while hiding and searching for rocks. They aren’t watching videos and don’t have their face in their phone. Everyone can enjoy the activity. Each person can participate in a different way. One gentleman decided to hide a rock, gave clues on the Facebook page, and said that whoever found his rock “wins” dinner with him at his favorite restaurant, My Place. He used it as a way to meet other people.
Bernadette is big on paying it forward. This was something she learned from her mom. The Wayne Fire Department assisted her mother many times when she was ill. Her mother always said she wanted to buy the fire department steaks when she died. When she did die, the fire department got their steaks. “I want to pay it forward. This community has given me and Alfred and the kids so much. Parents need to teach their children to go out into the community and help someone. Just be kind to one another. To succeed in the world, everyone must have compassion for another.”
This Wayne resident is changing Wayne, one rock at a time.