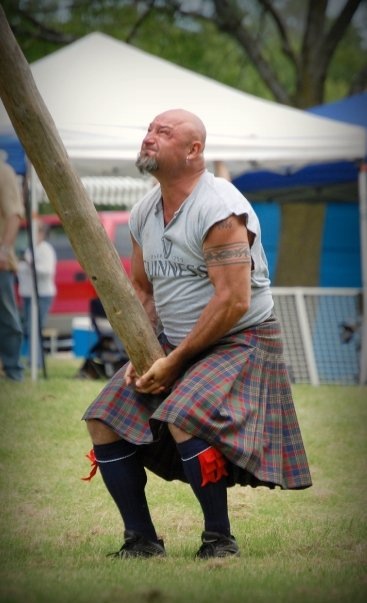 By Jenny Johnson – How far can you throw a 16- pound stone how about an 18-foot long log? John Tracy will compete at the World Master Championship in Scotland this month as part of the  Scottish Highland Games. This will be the first time the Wayne resident will compete in the annual International Championship held each year in, Scotland, Canada and the United States.
The Highland games are made up of  throwing events that have been popular in Scotland since the 1600s when Scottish people would practice for war. It is similar to historic track and field events. A lot of the rules are similar to track and field rules.
Over 200 people will compete in the World Masters. There will be 18 in his division.
Tracy has been competing the Heavy Events of the games for the past 14 years. The interest first began when Tracy saw a coworker at the Ford Wayne Assembly Plant where he works. He had on a t-shirt with the Highland Games on it.
Tracy asked,  “What is that all about? He asked if I wanted to throw. I’ve been hooked ever since. It’s addicting.”
This is not a mainstream sport so Tracy had to do some research on the rules and techniques.
”I watched a lot of YouTube videos,” he said.
Training consists of throwing twice a week at a local field. He also hits the gym and focuses on dead lifts and squats to prepare to throw the large stones, weights and cabers or trees.
The season ends in October. He participates in about 10 competitions during the season.
“This whole year is dedicated to throwing,” he said. He is coming off an injury from playing football with his grandson.
Tracy has always been active and enjoyed team sports. But the typical work out does not include swinging a 22-pound hammer, throwing a 16- pound stone or lifting and throwing with accuracy an 80 pound 18 foot tree log.
“Softball was fun it was okay but this is my passion,” John said.
John loves not only the athleticism of the Highland games but the camaraderie with the other competitors with the family members and with the spectators.
“We are a family it is a brotherhood,” he said.
The Highland Games are events that are held world wide throughout the year as a way of celebrating Scottish and Celtic culture and heritage. There are bagpipes, kilts, dancing, food and the athletic and sports competitions including the Heavy Events.
These events include stone throws, weight throws, hammer throws, caber toss, sheaf toss, and similar traditional feats of strength.
The Masters World Championship is an annual amateur competition. Tracy will compete in eight events.
There are two stone throws- Breamar Stone is a 20-26 lb. stone that is thrown from a standing position and Open Stone uses a 16-22 lb. stone and the thrower can spin to throw it. The thrower cradles the stone in the neck until it is released. This is similar to the shot put.
The light and heavy hammers are 16 lbs and 20 lb. round metal balls on the end of a 4 ft. pole and are thrown for distance. The hammer is whirled around the thrower’s head and thrown over the shoulder.
The weight throws are called weight for distance and are 42 lb. weights for the masters men. Tracy is in the masters division, which is the 55-59 age group. The weight is attached either by  a handle or chain. It is thrown using one hand and usually with a spinning technique.
Weight over the bar is a weight that is thrown with one hand over a horizontal bar. Each thrower gets three attempts to clear the bar. Tracy trains for this by throwing the weight over a swing set at a local elementary school.
His favorite event is weight for distance and the hardest for him is the stones. The weights, stones and hammers are all judged on distance. The day-long event starts with the stones event.
Competitions are usually held in open grass fields. Tracy arrives early sets up his canopy and supply  boxes and dresses in a kilt and hose. One rule of the games is all competitors must wear a kilt.
His competition kilt has patches from the different armed services. Tracy served four years in the Coast Guard. His son is in the Army and has done three deployments in Iraq and his dad and brother served in the Navy.
He will proudly represent them all while competing in Scotland.
“I am hoping for a top 10 finish,” he said.

He won 2) third place medals at the Highland Games in Scotland.
One in the Caber and one in heavy weight for distance.
He place 4th overall in his age group.

He was also part of a group to set a WORLD RECORD for 66 simultaneous caber tosses! 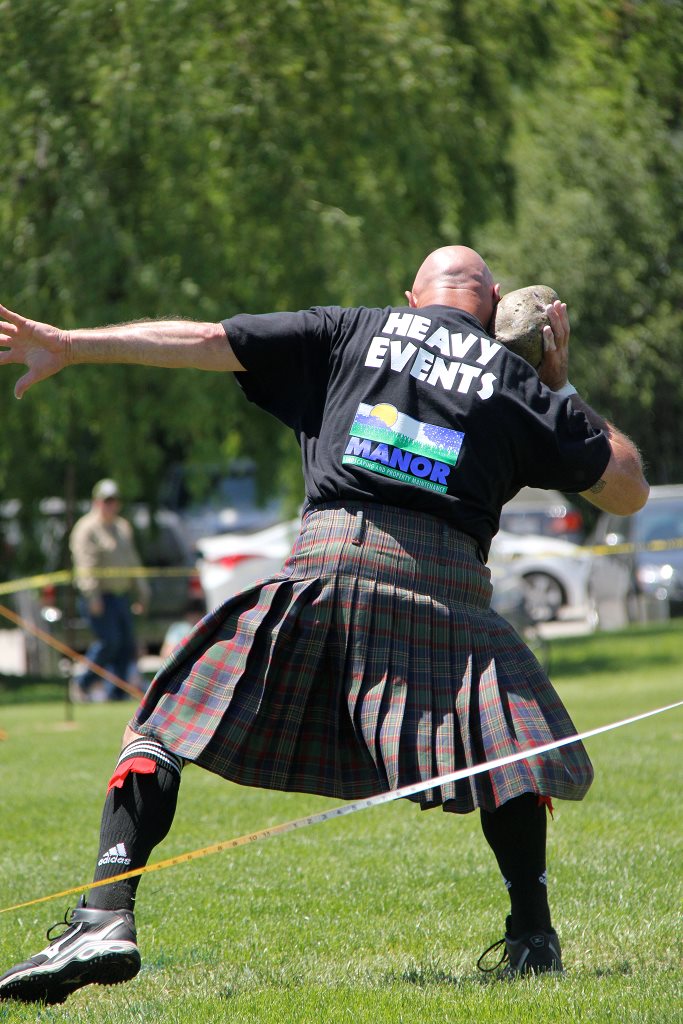