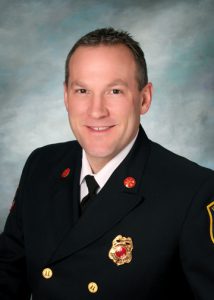 By Carolyn Marnon – Michael Stradtner was sworn in as the new Fire Chief for Wayne and Westland at a recent city council meeting.  Chief Stradtner has been with the Westland Fire Department for 22 years.  He spent one year as a paramedic for a private ambulance company and 14 years as a fire fighter. He spent three years as a sergeant operating the truck. In 2011, he made the move from firefighting to administration.  He was the Fire Marshal for two years and also served as the Assistant Chief of Training/EMS Officer.
As Fire Chief, it is Chief Stradtner’s duty to oversee the entire fire departments of Wayne and Westland.  There are currently four fire stations in Westland and one in Wayne.  He makes sure the day to day functions of the department are going well and handles the budget and political side of the department.
The administrative offices of the fire department are kept separate from the fire stations. The department tries to operate paperlessly.  They are very big on recycling.  They try to perform all operations electronically.
When he was growing up in Livonia, Chief Stradtner wanted to be a police officer.  His grandfather was a state trooper; grandpa convinced him that he might be better suited to be a fire fighter.  Once out of high school, he attended the fire academy, EMT training and paramedic training.  He says those programs are longer now than they were back then. At age 20, he started applying for jobs and was hired.
Chief Stradtner is on duty 24 hours a day.  Although he does have hours off, if an emergency arises that needs him, he has to be ready to roll.  He can be called anytime of the day or night to a scene or to handle an issue.
He says he will go to a burning fire during the day, but will only go to one at night if it is large.  His role at a fire is to handle the media and look out for the residents.  He will help with support from the Salvation Army and Red Cross.  He does not interfere with the firefighting process.
Besides his technical training when he was younger, Chief Stradtner has since earned a Bachelor’s degree in Public Safety Administration and is pursuing his Master’s in Organizational Leadership.
In talking about the merger of the Wayne and Westland departments, he says, “The merger has worked well…The fire department is stronger and delivering a better service than it ever has before.”  One of his goals is to get the department accredited through the Center for Fire Accreditation International.  Part of the process is finding the department’s weaknesses and fixing them.  It’s about becoming a more professional fire department.  He is just beginning the 2-3 year process.  To start, he needs to make sure he has three years of solid data.
His contract as Fire Chief will be up in three years. He would like to stay another 8 years, so he can have 30 years with the fire department. “I love coming to work,” he said.