By Courtney Conover –
Wife.
Mother.
Sister.
Daughter.
The roles of women in our society today are varying and wide-ranging. Still, it is not at all uncommon for women to be thought of—at least initially—within the confines of the roles above.
And there’s a good reason for that: The contributions that women make in their capacity of wife, mother, sister, or daughter are undoubtedly unique and cannot be denied.
But, wait, there’s more.
There is so much more that is inextricably woven into the fabric of what it means to be a woman.
And sometimes those individual fibers identify themselves as feelings—gratifying ones.
That’s how Helen Glandon describes her longtime involvement with Wayne Business and Professional Women, which entered her life during a time of unprecedented change.
“It was right after my divorce, and it was just a good feeling to, you know, be with women,” Glandon recalls. “Previous to that, I was my kids’ mother, I was a wife, but when I joined [BPW/Wayne], and I was—me—Helen. And it just felt good.”
Glandon, who currently serves as president of the Wayne chapter of Business and Professional Women, joined the organization back in 1980. Having worked in real estate for over 40 years, Glandon became aware of BPW/Wayne through a chance encounter with another BPW/Wayne member who was just embarking on a career in real estate.
And Glandon hasn’t looked back.
Says Glandon of her impression of the club—and the support it provides its members, “I said to myself, ‘I need this in my life.’”
Glandon was—and continues to be—in good company.
The history of BPW/Wayne, which launched in 1930, is a storied one and the roots of the organization run deep. Its objective is to serve as the leading advocate for working women, and the group’s mission is to achieve equity for all working women through advocacy, education, and information.
Beyond BPW/Wayne resides the Michigan chapter, which got its start in 1920 and marked 100 years of service in 2020. Much like BPW/Wayne, BPW/Michigan also champions itself as the voice of working women and aims to promote issues that matter to the lives of working women state-wide. Per the web site, bpw-michigan.org, BPW/Michigan’s objective is to educate and advocate for social, political, and economic issues facing women—and their families—at each stage of life.
And while the City of Wayne is far from the largest in the Great Lakes State, the city has represented itself well within BPW/Michigan over the years: three women from the Wayne chapter have served as officers at the state level in the last seven years.
The organization’s philanthropic efforts, which are primarily in the form of fundraising, serve as the driving force of BPW/Wayne. And the women have spread their energy far and wide through the years, having assisted First Step, which provides support and assistance to survivors of domestic and sexual violence, as well as local high school students by sponsoring Reality Store, which opened students’ eyes to the reality of dealing with real-world finances.
The group’s biggest yearly endeavor is the distribution of two scholarships—$1,000—each to two deserving Wayne Memorial High School female students who are seniors. Applications from qualified applicants are provided to BPW/Wayne by WMHS counseling staff.
“We consider [a variety of factors including] community and school involvement and whether [the students] work; we’ve had girls whose mother or father was incarcerated,” Glandon explains. “Basically, we try to look at the whole picture.” 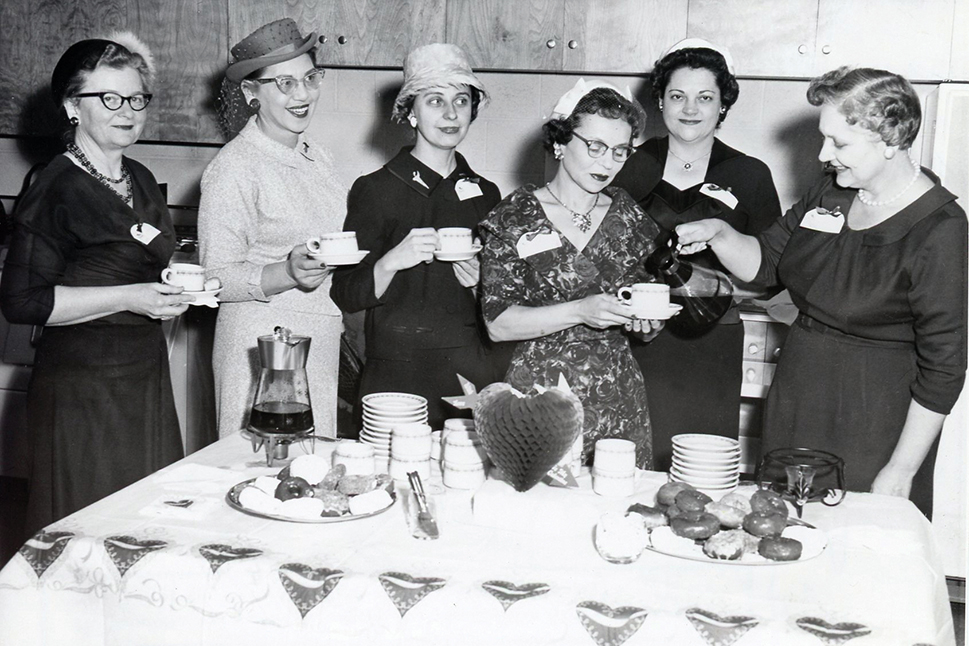 Whomever is chosen this year will be joining the ranks of an esteemed few, indeed: One of the organization’s most recent scholarship recipients is currently bettering her education at Brown University, a private Ivy League research university in Providence, Rhode Island.
“One of our members follows her on Instagram, and she says that she’s really enjoying college life and is involved in many things,” Glandon adds. “And we love to hear that.”
The two high school scholarships might not be possible without BPW/Wayne’s annual Christmas Tea Party, which provides the lion’s share of the money for the scholarships.
The event makes two things evident.
The first is that, for the women of BPW/Wayne, giving knows no bounds.
The second is that the level of fun and excitement these women generate—while giving back—is off the charts as well.
The latest tea fete, which was held in December of 2021 at Wayne’s St. Mary Catholic Church, was no exception.
“We had such a great turnout!” says Glandon, her voice powered by enthusiasm. “I was overwhelmed; we had nearly 80 women in attendance. And [at first] we were worried that we didn’t have enough door prizes, and we received so many. When I got up to speak, I almost lost it.”
What started many years ago as just as a tea party has since blossomed into an affair that gives its guests much to savor, including an impressive menu of eats such as meatballs, veggie trays, desserts, and other delectable bites.
Coffee and tea were provided by Karma Coffee and Kitchen here in Wayne.
The tea party is a prime opportunity for each hostess to display her unique creativity, as it’s each hostess’ responsibility to decorate the table where her eight guests will be seated.
“I love the traditional green and red,” says Glandon, who is a graduate of St. Mary’s Catholic School. “A lot of times, I’ll just go through my decorations downstairs and decide what I want to do.”
As beautiful as they were, the splendid colors weren’t the takeaway of the 2021 party: It was the generosity which took center stage.
If guests brought a brand-new, unwrapped children’s toy or a canned good, they earned a ticket for a door prize. The canned goods were given to St. Mary Outreach Center’s John Bolde Food Depot; the toys were then delivered to Saints Simon and Jude Catholic Church in Westland.
Remembers Glandon, “We collected close to 100 toys, which enabled 56 local families to pick out toys for their children.”
It was a fitting way for BPW/Wayne to end the year.
Going forward, the organization will continue to keep their sights set firmly on empowering women, in particular, “trying to get equal pay for women,” says Glandon. “We’ve been following the ERA [Equal Rights Amendment] ever since I joined—keeping up with that and hoping they can get it made into law. The deadline was extended, so hopefully it will become a law.”
The Equal Rights Amendment is a proposed amendment to the United States Constitution designed to guarantee equal legal rights for all American citizens regardless of sex. It seeks to end the legal distinctions between men and women in terms of divorce, property, employment, and other matters.
As Glandon will tell anyone who will listen, there is still plenty of work to be done. And BPW/Wayne welcomes those who wish to offer support.
“We can share our vast experience with each other, issues that are important to us, such as health, human trafficking, etc., we need to be aware of what’s happening out there,” she says. Since its inception 92 years ago, BPW/Wayne has benefitted from the time and energy of an array of local women, including educators, nurses, and salespeople. The group is currently comprised of 11 members and is ready to welcome more.
“We are so loyal to each other—we are thick as thieves,” says Glandon a longtime Wayne resident who now resides in Westland but still considers herself a Wayneite. “I love the people, the fundraisers we’ve done,” she says. “And now we have friendships.”
To learn more about Wayne Business and Professional Women, please call (734) 748-2817 or e-mail Helenglandon@yahoo.com. BPW/Wayne meets at Wayne Public Library on the fourth Tuesday of every month (with the exceptions of January and February) 6:30 p.m.