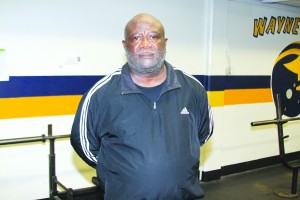 The Zebras will have a new varsity football coach when they take the field this fall. Donald (D-Why) Anderson will be the new head coach. Anderson is a graduate of Cody High School and attended Purdue University from 1981- 1984. He played football and ran track at Purdue and was captain of the football team and track team in 1983 and 1984. He earned All Big Ten honors in football and played in the Peach Bowl and the East/West Shrine Game. After Purdue, Anderson spent time in the NFL playing with the Indianapolis Colts, San Francisco 49ers and the Tampa Bay Buccaneers. He is still in the MHSAA record book with one of the fastest times on record in the 100 yard dash.
After his playing days, Coach Anderson worked at Cody High School as a defensive coordinator and head football coach, Henry Ford High School as defensive coordinator and assistant head coach, and at Northwestern High School as defensive coordinator, assistant head coach and head coach. During his coaching days in Detroit, Coach Anderson was part of three city championship teams and seven playoff- qualifying teams with two District Championships. Anderson also worked as a youth case worker at the Children’s Home of Detroit.
Mr. Anderson resides in Westland with his wife Sheila. He has two adult children, two step children and two granddaughters.