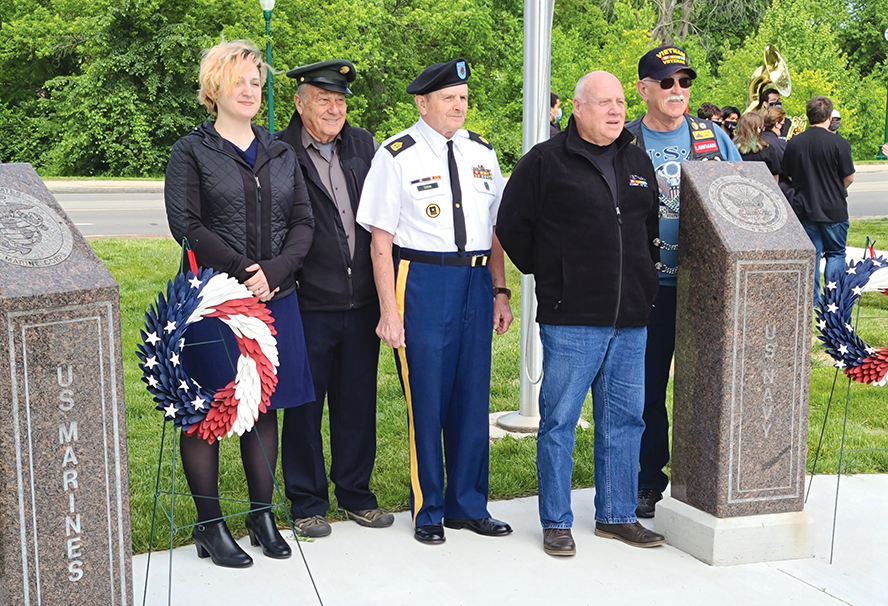 By Sarah Shurge – “People always say ‘Happy Memorial Day’ but is it supposed to be happy? Or is it supposed to be thoughtful?” said Jim Hart, Staff Sergeant, United States Army, Veteran, and featured speaker of the Memorial Day ceremony. “It’s supposed to be thoughtful, not only while you’re here but after you leave.”
The ceremony was on Monday, March 31st, at Wayne’s Veteran’s Memorial outside of Wayne City Hall.
The Wayne Veteran’s Memorial is a place where veterans can go to contemplate thoughts they are not willing to share with anyone else.
“This memorial is a physical reminder for those that have served and will live as a legacy for those that will follow,” said Hart. “These grounds are sacred.”
Over the last four years, a lot of hard work and over $100,000 was raised to help make the memorial a reality.
The memorial is accessible year-round with three benches that look towards the monuments that provide a space for contemplation. There are several parking spaces that face the memorial for those veterans who are unable or do not wish to get out of their vehicle.
On the cloudy Memorial Day morning, the memorial was surrounded by veterans, officers, committee members, citizens, families, and more.
City of Wayne Mayor, John Rhaesa said a few words to welcome the crowd and begin the ceremony.
“They [service members] were ordinary people who responded in extraordinary ways in extreme times. They rose to the nation’s call because they wanted to protect a nation which has given them, us, so much,” said Wayne Mayor, John Rhaesa, during his opening remarks.
Lead Pastor, Bobby Kelly, CrossePointe Community Church led the crowd in an opening and closing prayer. The presentation of colors was done by Nicole Meixner Klosner and Brendin Klosner. The Pledge of Allegiance was led by Ed Queen, Veteran, United States Air Force. Reading of In Flanders Fields was done by Stanley Shelton, Veteran, United States Army.
Star Spangled Banner, Taps and a musical number was performed by members of the Wayne Memorial High School Zebra Marching Band under the direction of Michael Wolf, WMHS Director of Bands and Orchestras.
Jim Hart had tears in his eyes during his speech as he touched on veteran suicide.
“Many men and women brought the battle home with them,” said Hart. “We are called to remember all those lost at war, and some are losing the battle at home and taking their own life.”
Hart continued by challenging the crowd to a task.
“Take it as a call to action. Call your battle buddies. Check in on them. Be there for them,” said Hart.
The management of Wayne’s Veteran’s Memorial is funded by donations, so even small donations keep the memorial going. If you are interested in donating, you can contact City Hall by calling (734)722-2000.