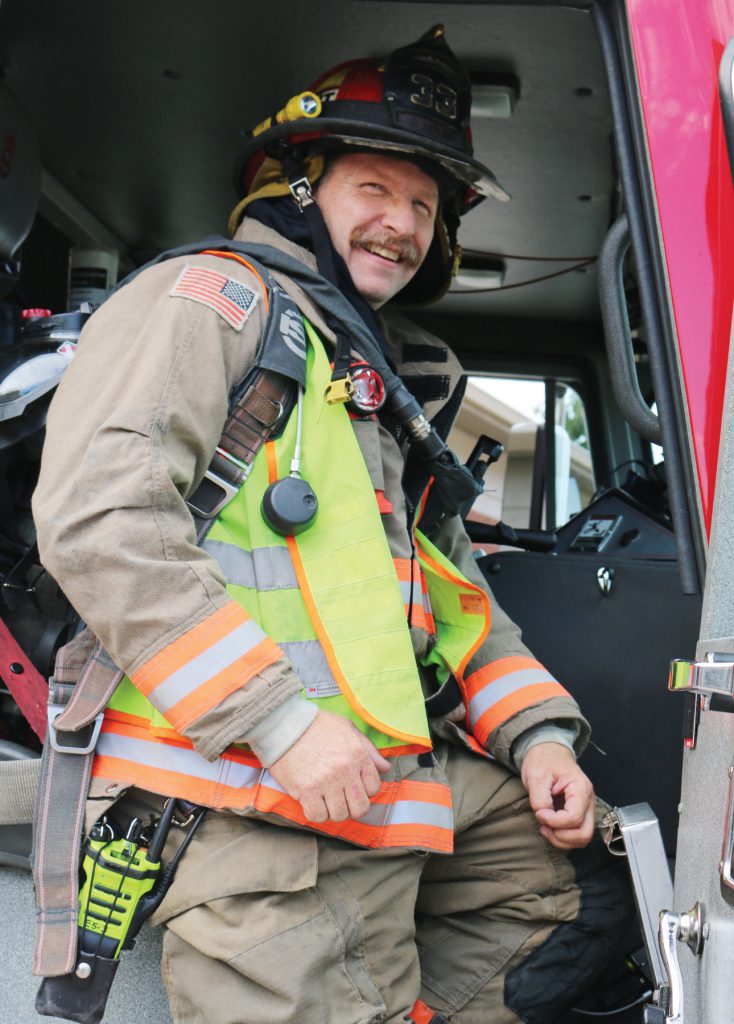 Wayne resident. Captain Dave Wylie has been with the Wayne Fire Department for 22 years.

By Carolyn Marnon – There are 18 fire fighters working for the Wayne Fire Department. Of those 18, six of them are what are called “grant” firefighters. The City of Wayne was able to hire these six through the Staffing for Adequate Fire and Emergency Response (SAFER) Grants program. They are funded until 2018.
Wayne fire fighters work 24-hour shifts. During those hours, they live at the fire station-eating, working, sleeping. But don’t be fooled. The sleep they get is not like the deep sleep you may be able to achieve at night. It’s more like the sleep you get when you have a baby or someone in your family is sick. You may be asleep, but you are still listening for anything that sounds “off.”
One of your fire fighters is a Wayne resident. Captain Dave Wylie has been with the Wayne Fire Department for 22 years. When he first arrived in 1995, he lived in Wyandotte. About 3 years ago, he made the move to Wayne. He says living here is convenient and he enjoys being part of the community.
Capt. Wylie grew up in Allen Park. He joined the Marine Corps where he repaired infantry weapons like rocket launchers, pistols and mortars. He travelled to the Middle East, Africa and Europe during his 4-year tour. Because of the paramilitary structure the fire department runs on with routines, structures and command (chief, sergeant, etc), it was easy to transition to a career in firefighting.
With the help of the GI bill, Capt. Wylie was able to earn an associate’s degree in fire science. He worked for a private ambulance company in Detroit and was a part-time fire fighter in Taylor. He was eventually offered positions in Allen Park and Wayne. Even though Allen Park is his hometown, he chose Wayne.
Capt. Wylie is a member of the Western Wayne County USAR (Urban Search and Rescue) team. He is trained to help in building collapse, high angle rescue, trench rescue and other major incidents.
Wayne also has two people who are members of the HazMat team. Fire departments send several members to get the training and then if a disaster occurs requiring that specialization, a number of fire departments will send their specialists. This distributes among all the fire departments the high cost of training and specialized equipment.
Capt. Wylie enjoys helping people, being part of the community and hanging out with his co-workers. He laughs when he says he once rescued a duck out of a storm drain.
“We do a lot,” said Capt. Wylie. “We’re trained highly.”