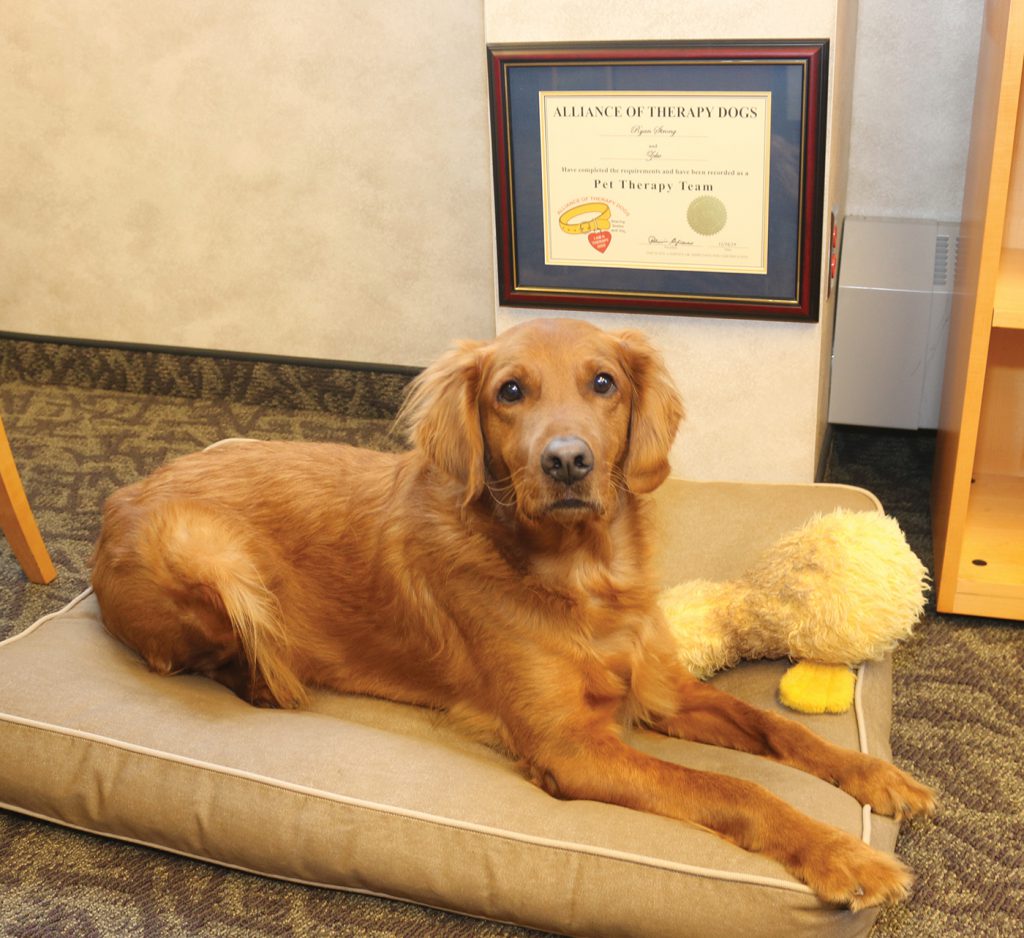 Zeke joined the the Wayne Police Department ranks as a community therapy dog.

By Carolyn Marnon – With a sigh of relief, 2020 has now officially come to a close. Let’s look back on a few highlights and events that happened in Wayne last year and were mentioned in The Wayne Dispatch.
The Wayne Police Department welcomed a golden retriever named Zeke to their ranks as a community therapy dog.
At the Ford Wayne Assembly Plant, the Ford Bronco rolled of f the production line and is being built.
Since 1966, Chum’s Donuts, across the street from Wayne Memorial High School, had been a part of many high school students’ morning. Chum’s closed early in the year after the death of owner Larry Stockwell.
The Wayne-Westland Community School District had what was probably their largest-attended graduation ceremony when 84-year-old Avery Hall received his high school diploma. Avery had left school at a young age to serve in the armed forces. The rest of the Class of 2020 graduated in a socially-distanced ceremony due to the COVID-19 pandemic that rocked the world.
Taft-Galloway got a sensory room for students with autism thanks to a large donation from Freddi Bello, the Pizzaman.
COVID-19 infiltrated the United States causing major shutdowns across the nation. Schools, restaurants and non-essential stores closed. Thousands of people were suddenly unemployed. Stay-at-home orders were put in effect. Zoom became the new way to interact with others.
Officer Michael Bolton was named 2019 Wayne Police Officer of the Year.
The Wayne Fire Department suffered as 50% of the staff were sidelined with COVID. Community members stepped up to supply the department with meals and gift cards.
Wayne-Westland Community School District welcomed a new Superintendent, John Dignan. Mr. Dignan was immediately tasked with the challenge of how to serve students remotely during the pandemic.
Lori Morrow was named the new Executive Director for Wayne Main Street.
A new Veterans Memorial was erected outside Wayne City Hall after five years of dreams and fundraising.
The sale of recreational marihuana was approved in 2019 by Michigan voters. In 2020, the Wayne City Council approved recreational marihuana sales in the City.
Most students are excited to return to school in September with new classes, new friendships to be made, and seeing old friends. Returning to learn in 2020 involved tables and desks set up in homes as Wayne-Westland students returned to school virtually.
Wayne’s oldest resident, 110-year-old Winifred Nichols, died in September. She did not die of COVID.
Wayne residents voted to eliminate the Ward System for electing city council members. This will take effect with the 2024 election. The Wayne City Council welcomed Mayor John Rhaesa, Mayor Pro Tem Tom Porter, Councilman Kevin Dowd and new Council member, Alfred Brock.

Gable retires from courthouse after 21 years