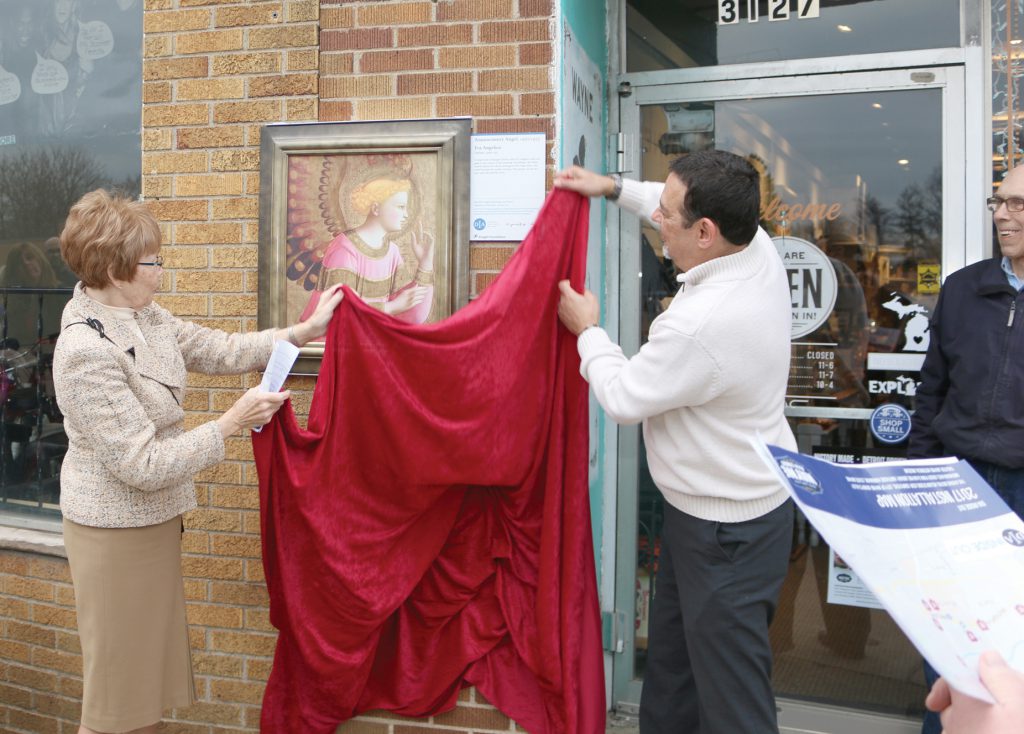 By Carolyn Marnon – “What are all those people doing standing on the sidewalk?” must have been going through the minds of Wayne Road drivers last month as they witnessed the mass of people standing outside Helium Studios on April 13. Passing cars honked their horns as Wayne Main Street and the City of Wayne kicked off the 2017 DIA Inside/Out program in Wayne with a ribbon cutting and the unveiling of “Annunciatory Angel” outside the store.
The Inside/Out program, funded by The Knight Foundation, brings high-quality reproductions of masterpieces from the DIA’s world-class collections outdoors to the public. The popular DIA program is in its 8th year. “Art has the powerful ability to unify, and Inside|Out allows us to bring people together outside of the museum walls,” said Salvador Salort-Pons, DIA director. “We see ourselves as more than a museum; we use art to encourage connections and improve understanding among our diverse communities.”  The DIA’s mission is to create opportunities for all visitors to find personal meaning in art.

Over the past seven years, the art museum has partnered with more than 100 communities and engaged tens of thousands of residents with art in places where they live, work and play. This year, the DIA will expand the number of installation sites from approximately 80 to 120 per three-month season – more than ever before! This is Wayne’s second time participating in the program; the first time was in 2012.
It took the DIA three years to develop the best technique for producing high-quality reproductions that could withstand the elements during a three-month temporary outdoor installation. The museum uses a graphic printer to fabricate vinyl images that are laminated to aluminum plates. The plates are then encased in pretreated wooden frames, creating a first-class reproduction. The lifespan of a work will vary depending on temperature, moisture, and additional physical conditions. While the prints are constructed for a temporary lifespan, they can last for several years. A friendly printer will also be able to easily assist if one becomes damaged. Inside|Out has not had a single case of vandalism or theft.
With the help of Wayne Main Street, there will be many activities associated with the art while it is on loan to the city. Below are some of the events and activities you can participate in.
June 8
The Wayne Bicycle Club will be hosting a DIA Inside/Out Display Ride on Thursday, June 8, at 7:00 p.m.  All interested bike riders will meet at the State Wayne Theater for the beginning of the proposed 4-mile bike ride.  The State Wayne features “Cotopax.” The ride will take participants down to Icon Computer Solutions to see “Colonel Montressor,” around to The Avenue for “Syria by the Sea,” the Wayne Historical Museum for “Fourteenth Street at Sixth Avenue,” over to the Wayne Public Library for “Irises and Calla Lilies,” then down to the new Derby’s Alley Pocket Park for “Eros Triumphant,” “Tiled Niche,” and “Princess Sophia.”
The ride will then head over toward Helium Studios to see “Annunciatory Angel,” circle around to City Hall/Goudy Park for “The Fisherman’s Wedding” and end back at the State Wayne Theater. A volunteer docent from the DIA will present information on each of the paintings along the way. 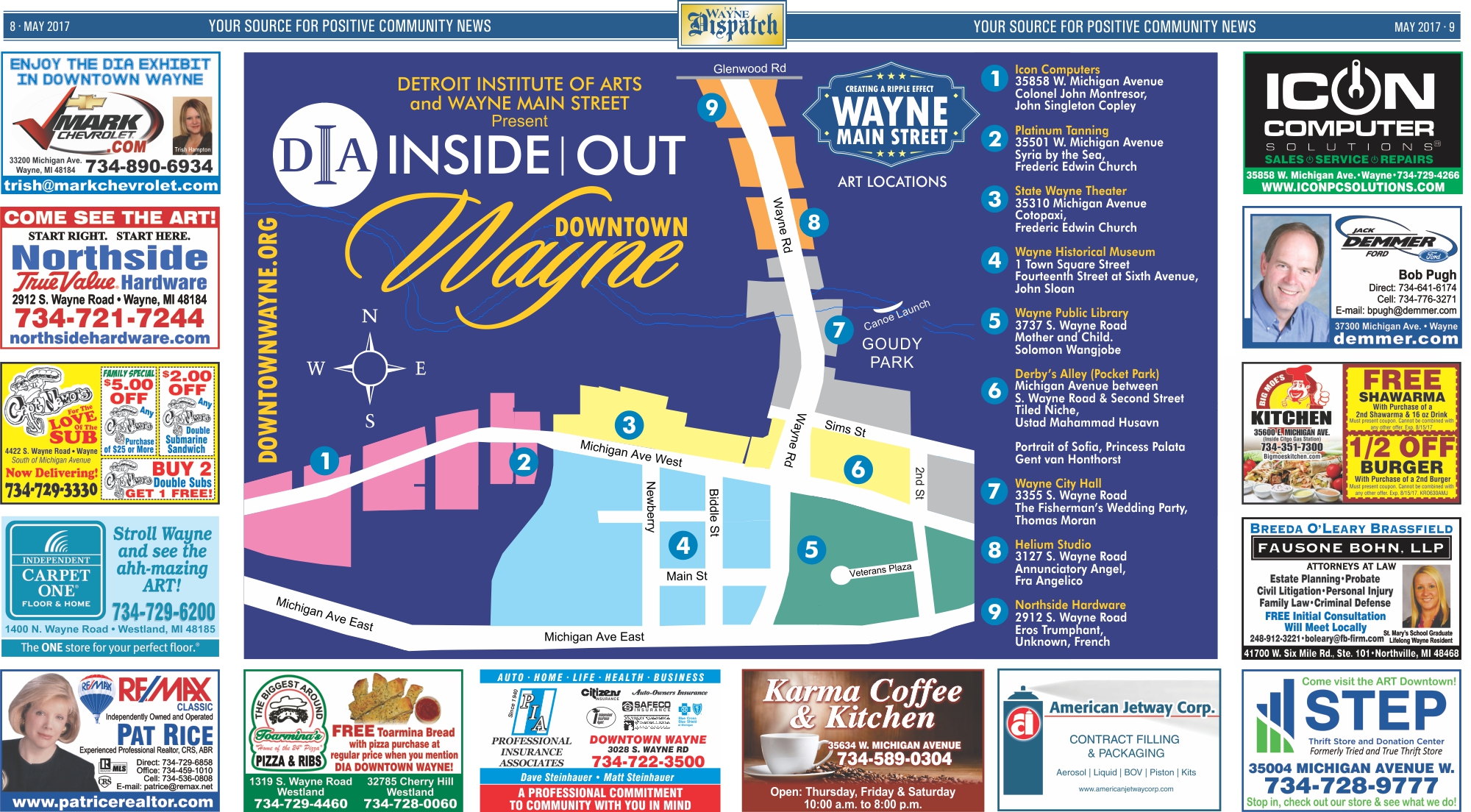 June 17
From 11:00 a.m.-5:00 p.m. there will be a Family Fun and Food Truck Day in Wayne. Check the Wayne Main Street website at www.downtownwayne.org or their Facebook page for more information.
July 14
There will be a drop-in workshop when the mobile DIA comes to Wayne to participate in our Downtown Days and Sidewalk Sales. The event is 11:00 a.m. – 5:00 p.m. More information will be available soon.
Ongoing until July
As part of this exciting program, Wayne Main Street has created a Scavenger Hunt that encourages participants to visit all 10 art exhibits throughout the downtown area. Those who complete the Hunt could be entered in a drawing to win some exciting prizes.
You then need to unscramble the highlighted letters to determine the puzzle answer. Entries then need to be dropped off at either Wayne Main Street/Wayne Historical Museum (if closed, you can drop through the mail slot at the side door) or Helium Studio during business hours. You can download and print a copy of the Scavenger Hunt at https://waynemainstreet.files.wordpress.com/2017/03/inside-out-wayne-scavenger-hunt-map.pdf or find one at Helium Studios, City Hall or the Wayne Public Library.
The art will be displayed through July 16.

Sharing scholarship makes everyone a winner 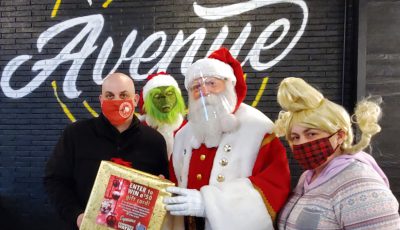 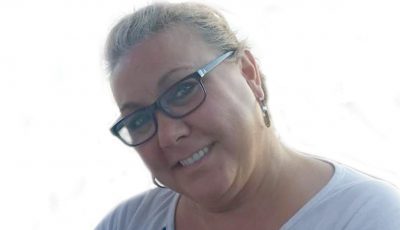 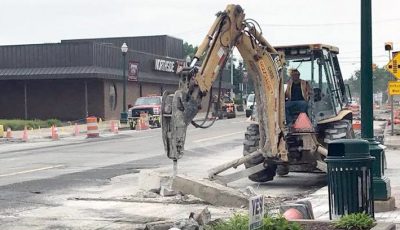