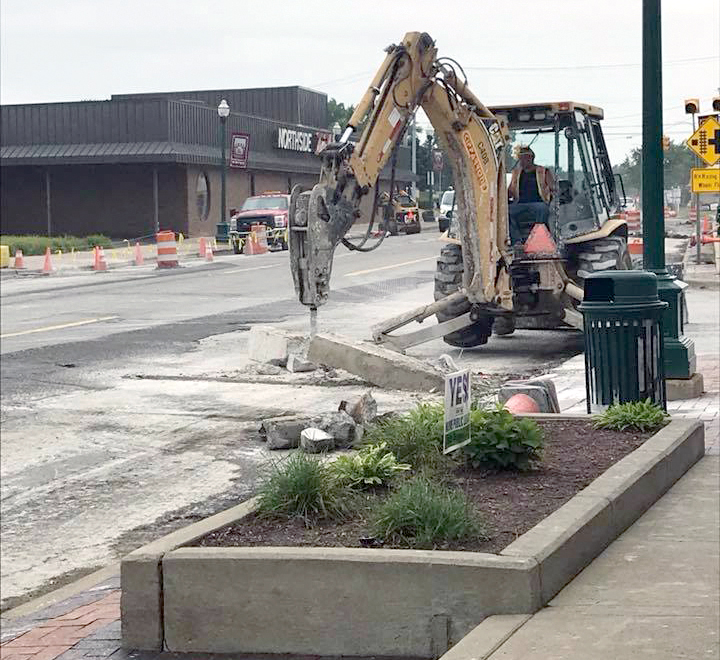 Construction of Wayne Road is scheduled to be complete by November. Photo by Maxwell Cameron

By Carolyn Marnon – The portion of Wayne Road that runs from Michigan Avenue to Glenwood Road will be undergoing construction now through November.
The road is undergoing an asphalt resurfacing, concrete pavement repairs, sidewalk ramps, structure epoxy overlay, guardrail, signing and pavement markings.
Construction began July 16 and is expected to be completed by November. While two-way traffic will be maintained, lane closures are expected and intermittent stoppages in traffic may be encountered.
Use caution when driving through work zones. City Attorney Breeda O’Leary reminds citizens that fines are double in construction zones.

Wayne County, which owns Wayne Road, has been coordinating with the Wayne Fire Department to make sure there is access into and out of the fire station during this time.
City Manager Lisa Nocerini commented at a recent City Council meeting that it costs approximately $1 million to redo a mile of roadway. The City of Wayne’s portion of the costs is estimated to be $69, 442. The rest will be covered by Wayne County and Michigan Department of Transportation.
If you need additional information, call the 24-hour customer service center at 1-888-ROAD CREW or visit www.WayneCounty.com.

Non-motorized mobility issues addressed
While Wayne Road is getting updated, questions have arisen as to whether crosswalks, bike lanes and other improvements could slow down traffic along Wayne Rd. Businesses have long lamented how fast cars speed along Wayne Rd. Residents were more aware of the so-called deficiencies of the area during Downtown Days when the only places to legally cross the road were at the light at Glenwood and the light at Sims. Any event happening between those areas made it harder for pedestrian traffic to get around.
The goals of Wayne County and Michigan Department of Transportation (MDOT-which owns Michigan Avenue) are to convey traffic as efficiently and effectively as they can, according to Mike Buiten of Wayne’s Building and Engineering Department.
“If I could convey anything to the residents of Wayne, it is these two things,” says Mike. “First, the County doesn’t have the same view of streets as the city. They are looking at traffic flow. Bikes and pedestrian crossings slow that down. Second, the city manager has been determined in putting issues in front of the County and to get their ear on City concerns. She’s very determined. I love the city manager for that.”
When meeting with the County for the current Wayne Rd project about 1 ½ years ago, City Manager Lisa Nocerini was able to tell the County officials what Wayne would like to see along this stretch of road. The County, at that time, was able to give her reasons why those things wouldn’t work in Wayne. “I credit Lisa for getting it out there how we feel as a city,” said Mike, despite nothing coming to fruition. Resurfacing this portion of Wayne Road has been in the planning stages for approximately five years.

Citizens of Wayne can be very determined when they want something. By becoming educated on the subject and doing research, Wayne can become that vision of an even better family-friendly hometown.