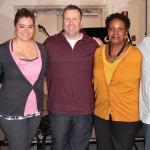 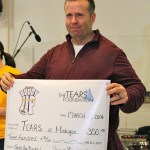 Buddy Shuh was presented with a donation to the TEARS Foundation. He is president of the Michigan Chapter.

The season may be over but their journey has just begun for more than 300 participants in Buddy Up 2.0. The seven- week program focused on nutrition, exercise and spiritual health. Led by season 13 Biggest Loser contestant and Wayne resident Buddy Shuh,  Buddy Up 2.0 added coaches with team leaders to keep Buddy Uppers motivated.
At the awards ceremony there were five Biggest Loser alumni including Mark  Cornelison, Kim Nielson, Jeremy Britt and Debbie Lounds. There was also a live Skype with Biggest Loser trainer Dolvett Quince. He encouraged everyone to keep up their healthy lifestyles.
There were 90 people who received a t-shirt for completing a triathlon- 112 miles by bike, 2.6 miles by water and 26.2 miles by foot- in six weeks.
About 75 people received awards for their outstanding accomplishments and hard work during Buddy Up 2.0.
As a thank you for inspiring an entire community Buddy was presented with a framed photo signed by all the Buddy Up coaches and a $300 donation toward the Michigan Chapter of The TEARS Foundation. Buddy is the president of the chapter that provides funds for funerals of children under age one.