Check out the businesses on the south side 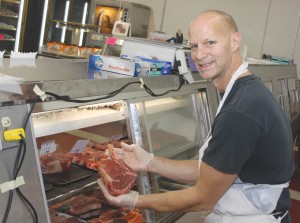 Todd LaCoe shows one on the fresh cuts of meat at Pizmo’s Market.

By Dee Ryan – You’ve heard the old saying “When one door closes another opens.”  Something like that happened in Wayne.  We were lamenting the closing of our Kroger store –but hallelujah!  Pizmo’s Market opened.  We are all very happy.
The spotless store is run by Todd  LaCoe and Matt Toyeas.  Together they have upwards of 40 years in the grocery business.
Pizmo’s offers just about every type and cut of meat, along with fish selections.  Their fresh meat counter takes up one very long wall in the store.
Let me tell you what’s available.  We’ll start with the prepared pan ready hamburger choices.  They have a burger mix of Peter Lugar Steak Sauce and green onions—a Wayne Burger named in honor of all the residents who have been so supportive of Matt and Todd and Pizmo’s.  It has sautéed mushrooms, green onions and Swiss cheese.
Along with every type of roasts and steaks, stir fry strips from premium beef are also in the meat department.
You ask about fish?  There are salmon burgers and potato encrusted cod.  They have crab stuffed with portabella mushrooms and if you want cooked shrimp you’ll find it there.
Selections of chicken include chicken breasts, kabobs and wings.  Plus  a delicious chicken salad which is made in house.
There are other salads such as deviled egg potato salad and a huge selection of deli lunch meats.
Pizmo’s offers a deli tray, a wide variety of cheeses, staples such as eggs, orange juice and your basic fresh veggies.  Also featured are oven ready meals such as pot roasts and meals to go.
Each week Pizmo’s has a selection of their meats etc. on sale.  These are itemized on a flyer which you can pick up at their front counter.  Every Tuesday is senior discount day.  If you’re 65 or older, a discount of 10% will be taken off your bill.  The store also accepts EBT Bridge Cards.
Now for some important information—Pizmo’s is at 4308 S. Wayne Road between Annapolis and Clinton.  The phone # is (734) 895-9600.  The store is open Monday through Sunday 9:00 a.m. to 7:00 p.m.  If you call ahead, you can place an order and pick it up, say when you leave work.
Although I had bought some nicely rare roast beef for sandwiches, my husband, Kerran, went back and bought four of their already made up hamburgers—two of the smoked gouda cheese and mushrooms and two BBQ and bacon.  I have a feeling he might do some more shopping at Pizmo’s.
Heading South on the block we pass Grace African Hair Braiding.  It features a large variety of braids and twists and welcomes Walk-Ins– (734) 326-7113.
Next is Metro PCS which offers cell phones and wireless for all–(734) 641-0202.
In the middle of the block is the 7 Star Party Store.  Owned by Amy, she tells me they’ve been in business at this location for 3 years.  In addition to stocking your favorite beverage, the store has a wide selection of food.  You could say “everything from soup to nuts” with room for sundries and T-Shirts.  On the side of the store is Capt. Nemo’s Subs offering a yummy menu of subs.  They open at 10:00 a.m. except on the weekends when they open an hour later.  They have luncheon specials for $5.00.  Phone (734) 729-3330.
Still traveling South we meet John Roehrig, who along with sister, Christie, own the “Craft Beer Store” (formerly JR3’s).  They stock 400 Michigan beers as well as 100 to 200 other brands.  They have 10 varieties of Mead—which is a honey wine, 10 different types of Cider, 300 types of wine – 100 of which are from Michigan.
Hard Soda (Pop) is now in demand.  So John shows me the two shelves stocked with “Hard” Root Beer, Cranberry, Double Chocolate Stout and Ginger Ale.  The “Hard” sodas also have names like “Banana Bread” and “Apple Pie.”  Christie and John occasionally host beer and wine tasting.  They will also give you a discount on cases and have keg service on request.
Have you heard of “Michigan Vinegar?”  They have it.  There’s Michigan Cranberry, Pineapple and Fennel Seed and Beet and Carrot juice.  These are usually mixed with other beverages to make unique drinks.
Rounding out my travels, we find “Spotless Detailing.”  Owned  for 30 years by Vincent Yurgelatis and his family.  They promise a high quality service.
With a gas station at the corner, I think you can find all your needs on this block in Wayne.

What’s everybody reading in town