What’s everybody reading in town 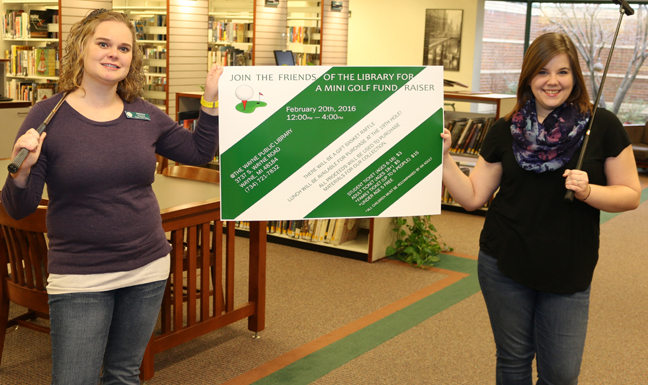 Adrianne Schinkaui and Leigh-Ann Hensley invite you to join the Friends of the Library for their annual mini golf fundraiser on February 20th. Photo by John P. Rhaesa

City Clerk, Matt Miller writes “ I am almost finished with “Once in a Great City—A Detroit Story” by David Mariniss.  A wonderful history of the City with a look at all walks of life, from poor South West Detroit kids to Motown greats, to the Ford Family.  It harkens back to the glory days of the City and the formation of the society today.  It also is a sad reminder of what was left as the city declines.
He also writes, I just got “The Danish Girl by David Ebershoff and broke my hard and fast rule of starting one book and not finishing the other.  I read the first few chapters.  It is just laying the groundwork now.
Matt also read the book “Rosemary-the Hidden Kennedy Daughter” by Kate Larson. “ Was also very good.  It gives many details about her and her life.  It explained the surgery she had and how awful and terrifying it would have been for her.  It failed so terribly, and Rose Kennedy didn’t handle  the tragedy well.  It was the practice of the day to hide away the child, but after the surgery, Rosemary really was hidden away.
Matt asks if I will do a movie review…”Absolutely.” And this is what he has to say about “Brooklyn.”  “The movie is one of the most wonderful movies I have ever seen.  It is a story of a young woman who comes over from Ireland in 1952 and ends up in Brooklyn.  It is a modern day story about coming to America.”  “I give it two thumbs up!”
The Ladies’ Literary Club is reading “Station Eleven.”  The author is Emily St. John Mandel.
Kirsten Raymonde will never forget the night Arthur Leander, the famous Hollywood actor, had a heart attack on stage during a production of “King Lear.”  That was the night when a devastating flu pandemic arrived in the city and civilization as we knew it came to an end.
Twenty years later, Kirsten moves between the settlements of the altered world and they have dedicated themselves to keep the remnants of art and humanity alive.  But when they arrive in St. Deborah by the Water, they encounter a violent prophet who threatens the tiny bands existence.  The story moves back and forth, depicting life before and after the pandemic and the strange twist of fate that connects them all.
Mary Lindsay has been reading “Still Life”. A Chief Inspector Gamache novel by Louise Penny. This murder mystery is set in the small town of Three Pines, near Quebec; a fictional place you’ll want to visit or move to after reading about it. Our former City Manager, John Zech recently read “The Road to Character” by David Brooks.  He’s now reading “The Orchardist” by first time author, Amanda Coplin.  Next on his ‘to read’ list is “The Magic Strings of Frankie Presto” by Mitch Albom.  Frankie Presto, according to the reviews, is Mr. Albom’s most unforgettable character.
From Steve McGladdery, Co-Director of the Wayne Library…”Never too busy to regale someone with my latest reads.  I actually just finished a good one called “The Art of Language Invention.” It’s all about the process that goes into creating an original language for the purposes of fiction, and traces the history of the craft from its early days with things like “Lord of the Rings” and Star Trek’s “Klingon” (all complete speakable languages) to modern day superhero movies and popular TV shows. The author has created languages for “Game of Thrones” and “ Thor: The Dark World.”
Lois Van Stipdonk praises 4 books she enjoyed.  “2 AM at the Cat’s Pajamas” by Marie Helene
Bertino. She calls it a delightful flight of fancy. “Dreaming Spies” by Laurie King and “The Signature of all Things” by Elizabeth Gilbert. She is also the author of “Eat, Pray and Love.” Lois also liked “Dry Bones” by Craig Johnson.
Did you play Mini Golf at the Library last year?  Well, back by popular demand Mini Golf will again be at the Library.
It will be on Saturday, February 20th. The hours are from 12:00 noon to 4:00 p.m.  The library will be closed for normal operations that day.
Ticket prices: Students (age 6-18) $3.00;  Adults (18 and over) $5.00.  A family ticket (up to 6 people) $15.00.  Under 5—free.
At the 19th hole there’ll be food. A hot dog, chips and pop  are $3.00. Chips are .50 and a hot dog is $2.00.  Rounding an afternoon of fun will be the “hole-in-one” contest.
So get out your golfing duds and come play mini golf at the Library.

Check out the businesses on the south side