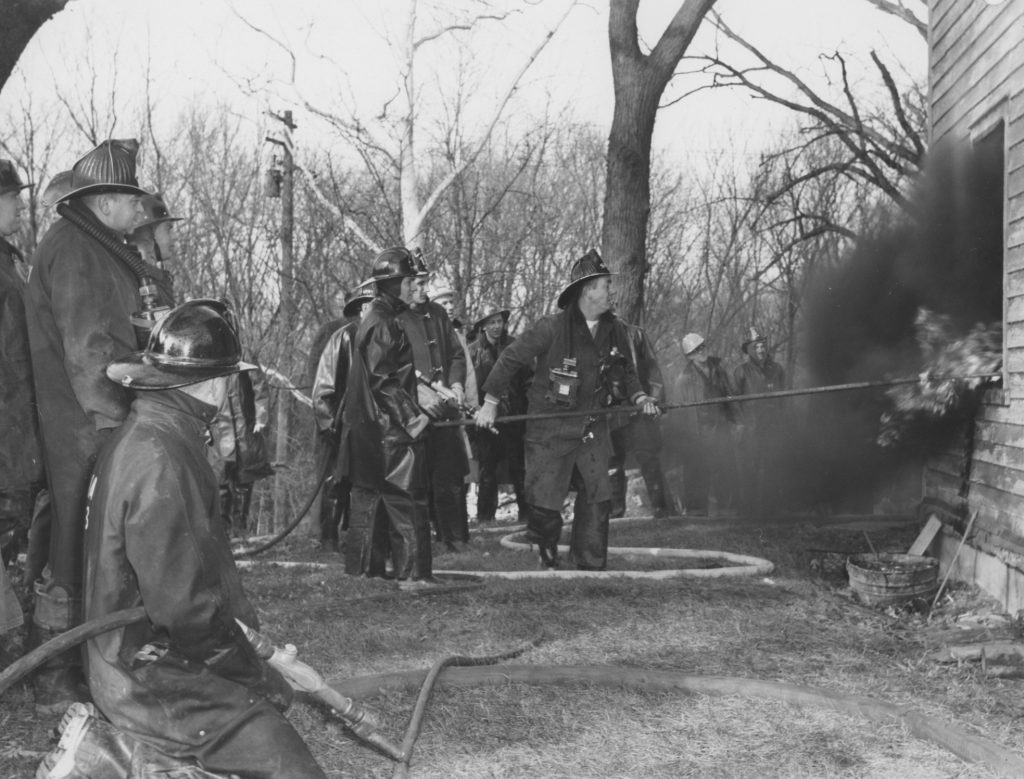 Wayne Firefighter Owen McGill during a drill in 1957. 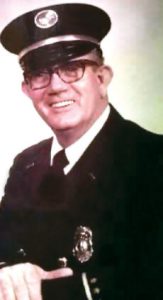 By Carolyn Marnon – Retired Lieutenant of the Wayne Fire Division Owen McGill died last month; he was 90 years old.
Born in Sarnia, Ontario, Canada in 1927, Owen McGill moved to Wayne, Michigan in October 1942 where he attended Fordson High School in Dearborn and Wayne High School in Wayne. He enlisted in the US Navy in January 1945 where he served on a minesweeper in the Pacific Theater. After he was discharged, he worked with his father in the family trucking business until 1949 when he became employed by the Cadillac Motor Car Company. While he was working there, he took the examinations for both the City of Wayne Police and Fire departments which he successfully passed.
Fire Chief Henry Goudy interviewed Owen. Owen started working for the fire department in 1951, was promoted to Sergeant and later to Lieutenant, the rank which he held until his retirement in 1982. During his 30 years with the department, he served under three Fire Chiefs, three City Managers and one Public Safety Director. To stay informed of the changing environment of fire service, Lt. McGill attended the various schools and seminars offered. He was also a state-licensed Emergency Medical Technician (EMT).
Lt. McGill stayed busy. He served two terms on the City’s retirement board as a Fire and Police representative, was a member of the International Association of Firefighters Local 1620 (as well as a past President) and was a past President of the Wayne Memorial High School Sports Booster Club. He served as an assistant scoutmaster for Boys Scouts of America Troop 1746 and served on the P.T.A. board at Washington Elementary School. He was a member of Wayne #112 and Lincoln Park #539 Masons.
Joe Kadlec hired into the Wayne Fire Department in January 1970 under Lt. McGill. He said Owen was a very well-liked man, a mentor to many and was mentally sharp up to the end of his life. At the firehouse, Lt. McGill was even-tempered and had a sense of humor. He taught the men under him how to approach issues sensibly. He was willing to teach his men and help them get through their careers as fire fighters. He displayed exemplary conduct and professionalism. Joe remembers him as “the Walter Brennan of the fire department.”

Where can I take my valentine?