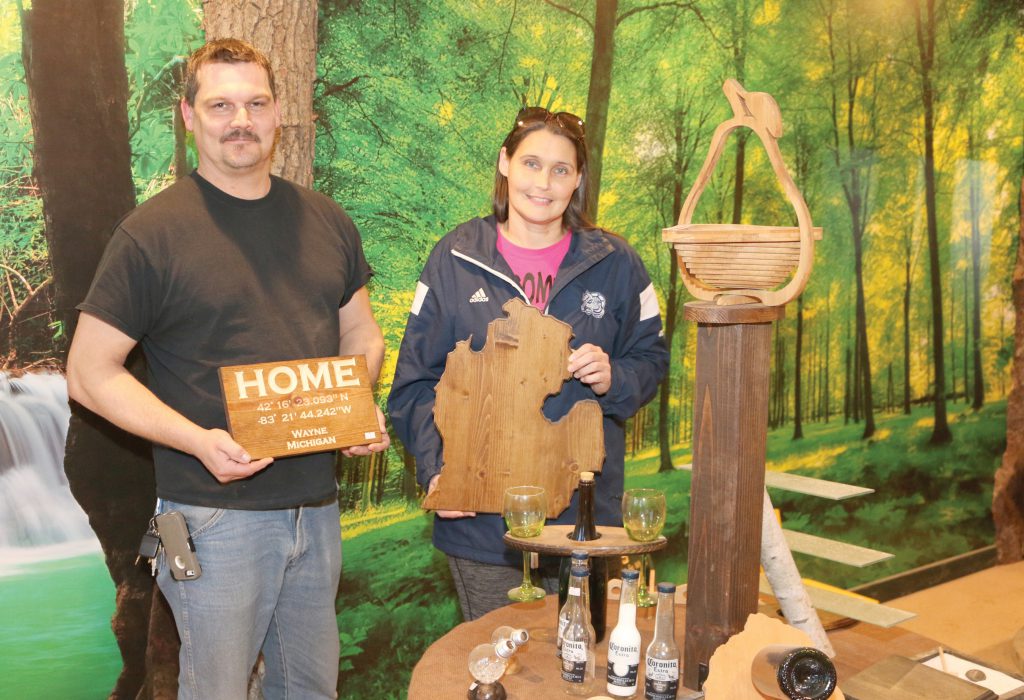 Jeff and Mary PowersBy Carolyn Marnon – Powers Woodcrafts, a specialty woodworking and crafts store, has just recently opened its doors to the public.
Powers Woodcrafts is locally owned by husband and wife team, Mary and Jeff Powers. They wanted to share their love of art and wood crafting with the community. The Powers family moved to Wayne in 2007. All four of their children attended Wayne-Westland schools. Mary was actively involved with the Wayne-Westland Community School District. In 2015, she decided to expand her volunteering efforts to benefit her hometown by volunteering with Wayne Main Street where she eventually became a member of the Board of Directors. Jeff has been a wood-crafting enthusiast for many years. It was this enthusiasm which inspired the couple to start their new venture. “With locally sourced art, as well as crafting materials growing in demand, this new member of our family of businesses will be a great addition to our City,” says Pat Rice, Board Member of Wayne Main Street and Chair of the Business Empowerment Committee.
Powers Woodcrafts is located at 35065 Glenwood Rd at the intersection of Wayne and Glenwood. The building is positioned between Trendsetters Boutique and The Alano Club.
The ribbon cutting ceremony for Powers Woodcrafts will take place February 14 at 4:00 p.m. and is open to the public. The store is open Tuesday and Thursday 3:00-9:00 p.m. and Wednesday, Friday and Saturday 11:00 a.m.-6:00 p.m. The store is open only by appointment on Sunday and Monday.
“We want to put Wayne, MI on the map. Even if that means we have to carve the map into wood ourselves!” – Mary and Jeff Powers.