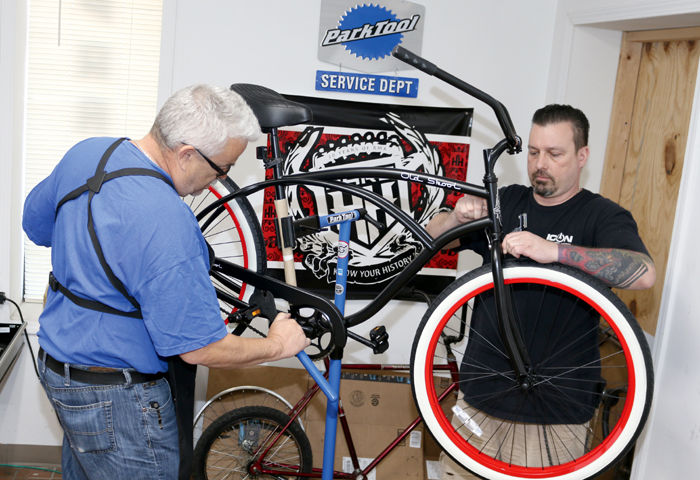 Roger Kormos and Brian Ewanciw tune-up a bike at the Wayne Bicycle Shop.

This June, Wayne Main Street (WMS) will be partnering with the Wayne Bicycle Club and Wayne Bicycle Shop to host three bicycle safety inspection events. The events will take place Saturdays in June from 12:00 (Noon)-4:00 p.m. running from June 13 – 30 at the Wayne Bicycle Shop, located inside Icon Computer at 35858 W Michigan Ave, Wayne, MI 48184. The shop will be offering free bike tune-ups to Wayne residents who present an identification with their address. This event is open to residents of all ages.
The Wayne Bicycle Club was founded in 2016 to promote biking in Wayne. The Club hosts weekly rides beginning at the State Wayne Theater every Thursday at 7:00 p.m. Earlier this year, Bike Club founder Brian Ewanciw was inspired to open a Pop-Up bicycle shop in downtown Wayne.
Last year, WMS launched a crowdfunding campaign through the Michigan Department of Economic Development (MEDC) to purchase and install 30 bike racks in downtown Wayne. This project included hosting a number of cycling promotion events. The organization is excited to host these events in partnership with the Wayne Bicycle Club and Wayne Bicycle Shop this June and hopes to promote more pop-up events/retail in Wayne to inspire small businesses and retailers.