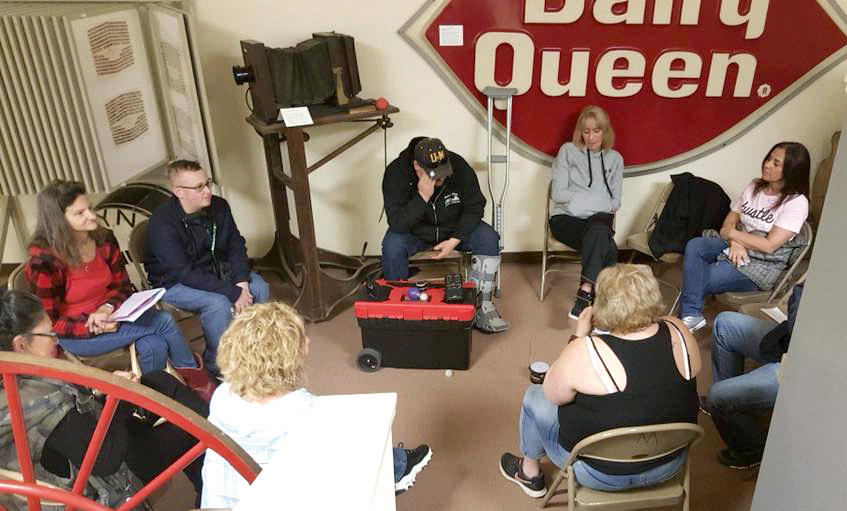 Carolyn Marnon observes a ghost hunting session on Friday the 13th at the Wayne Historical Museum.

By Carolyn Marnon – Friday the 13th. It can strike fear into anyone. Long considered an unlucky day in Western superstition, it has inspired a 19th century secret society (the Thirteen Club), an early 20th century novel (Friday the Thirteenth), a horror film franchise (Friday the 13th), and two terms: paraskavedekatriaphobia and friggatriskaidekaphobia that, according to History.com, describe fear of this supposedly unlucky day.
What could be more fun than to spend Friday the 13th (April 13, in this case), at an Adult Ghost Hunt being held at the Wayne Historical Museum? The event was a fundraiser for the Wayne Historical Society. I was invited to the event by Marketing Chairman of the Wayne Historical Museum, Brenda Ozog. Having never been to a Ghost Hunt before, I thought it would be interesting. I decided to go.
Since I didn’t want to get in the way while the event was starting up at 8:00 p.m., I decided to come in at 9:00 p.m. to observe. The museum had sold tickets in hourly time slots with the event ending at midnight.
As I arrived, I noticed quite a few small groups and couples leaving the museum. I was greeted by Brenda when I arrived and introduced to a small group of people seated in a back corner of the museum. There were a few gadgets on the floor in the middle of the group. A man and woman were the only ones who were guests. The rest in the circle were members of Motor City Ghost Hunters. We were told not to whisper because the machines that were recording messages could pick it up. We should talk in our normal voices. We were also told that the investigation was ours, not theirs.
The members got excited when they recorded a temperature drop of 20 degrees. For reasons unknown to me, they thought it was Chief Goudy standing behind a member. One of the gadgets being used was called an ovilus, also known as a spirit box. It is a device that purportedly allows the user to communicate with the dead by using energy changes to trigger words. Words that came up for us included caress, muddy, frigid, give, whose, chance, two, trapped, thick, excel, numb, raw and chain. 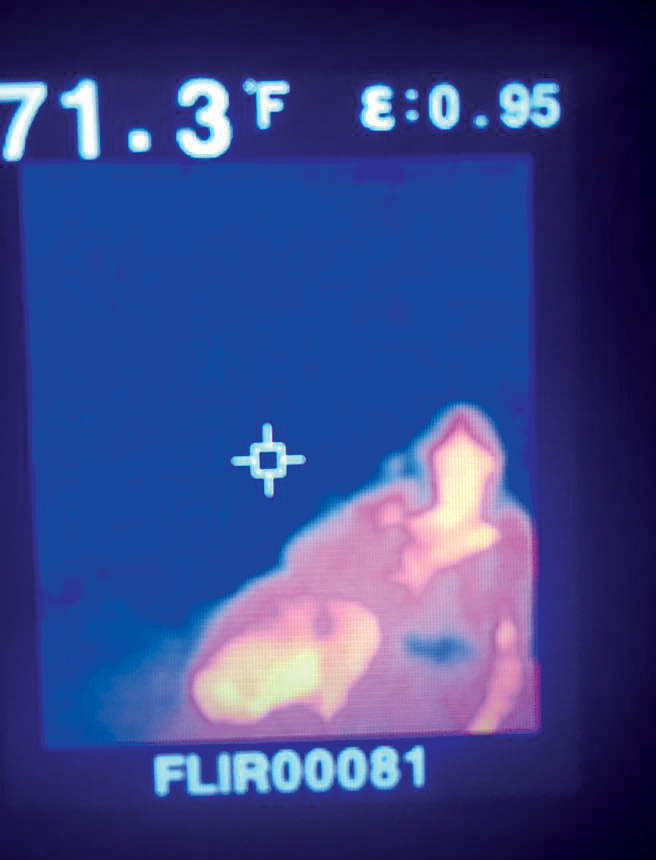 An image that came up on the specialized camera.

After this experience, we were taken into the front room where a Motor City member was saying a woman at the top of the stairs wants to leave, but a man is holding her and keeping her from leaving the top of the stairs. I started talking to the couple who came from Garden City to attend the ghost hunt. The woman said this was the second investigation she had been to. She had an interest in the paranormal, but she was as perplexed as I was by what was going on at the museum. We were allowed to go upstairs where other members were excited about some “hot” readings they were getting on their gadgets.
Back downstairs, I had the opportunity to talk to Brenda and a few other members of the Motor City Ghost Hunters. Brenda explained that a flashlight that is loosened can provide yes and no answers to questions. Specialty cameras are also used. When going to homes where the resident speaks of having cabinet doors that open and close on their own, the ghost hunters will check whether they are level with marbles.
Motor City Ghost Hunters are busy. There are different types of mediums (an intermediary between the spirit world and ours) on the team. They normally do residential investigations on Fridays and businesses on Saturday. I spoke with Chass who says she is a medium. She can’t turn off the spirit world; they are with her 24/7. She says she needs a fan, TV, nightlight or a noise machine to be able to fall asleep. She also talked about the period between October 30 and November 3 where the veil between life and death is said to be very thin and where she feels things even more strongly. She relayed the story of her son and his “abilities.” When he was a year old, she was giving him a bath and drying him off when he pointed to himself and said “Just” (his name is Justin) and then to the mirror and said “Ry.” This surprised Chass because Justin had an identical twin brother, Ryan, who had died after birth. Justin didn’t know this. Everyone in her family tree on one side has some type of “ability,” she says. She tells of a near-death experience where she is looking down on herself. When I asked about the white light I have heard about, she said there wasn’t one in her experience.
I learned that most people get involved with paranormal investigation because of a near-death experience.
Before leaving, we were advised that we should each be saged, otherwise known as smudged. MCGH members used sage to cleanse us of negative energies or influences. We were also told we should tell the spirits not to follow us home. Whether I believe or not, you can bet I told those spirits not to follow me home.
All in all, this event did raise $1300 for the museum. That is a positive outcome. If you are interested, the Motor City Ghost Hunters expect to be back at the museum around Halloween. Tickets sell out quickly, so don’t delay when they do become available.