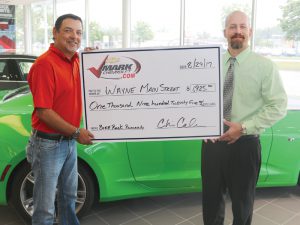 By Maxwell Cameron – Spend some time in downtown Wayne and it’s clear that biking is positively impacting our community. More and more Wayne residents are using pedal power as a healthy way to enjoy our city’s downtown space. Ridership in the Wayne Bicycle Club’s weekly slow-roll style ride every Thursday evening (Spring through Fall) has also been steadily growing since the club was founded last year.
During summer events like this year’s Downtown Days and the Concerts in the Park series at Goudy Park, it was typical to see bikes locked to fences and posts, as community members opted to bike to these great community events. While we were encouraged by the growth of biking in Wayne, Main Street knew that we needed to do something to promote our city as a bikeable destination. Working closely with our stakeholders and the City of Wayne, our organization felt that the largest area of need was greater access to secure bike parking in downtown Wayne.
In late July, Wayne Main Street, in partnership with Mark Chevrolet, the Wayne Bicycle Club, and the Wayne DDA launched a crowdfunding campaign to install bike racks in downtown Wayne. The goal was to raise $5,500 in local contributions in 35 days through Patronicity.com, a Michigan-based online fundraising platform, similar to GoFundMe. Because Wayne is a Main Street Community we also had the opportunity to win a matching grant from the Michigan Economic Development Corporation’s (MEDC) Public Spaces Community Places program if we were successful in meeting our goal. Not only did we meet the goal for this project, but we exceeded our wildest expectations, fundraising $7,897 in our community, and winning the MEDC’s matching grant award.
With this funding, over the next 2 months Wayne Main Street will work with the City of Wayne to install 20 brand new bike racks in downtown Wayne and refurbish the existing bike racks located at City Hall, the Wayne Library, and the Wayne Historical Museum. Additionally, we will be producing a biking route and safety brochure; and in collaboration with the Wayne Bicycle Club host a series of pop-up bike repair events this Fall 2017 and Spring 2018.
We are so excited to see how bike racks will transform downtown Wayne. Providing access to bike parking will hopefully encourage residents to take advantage of our historical downtown and its many shops, dining opportunities, and entertainment options. This project would not have been possible without the support of community members, businesses and organizations who stepped up to contribute to the Patronicity campaign. A special thank you to all who donated to this campaign.