Recall election information: know before you vote May 8 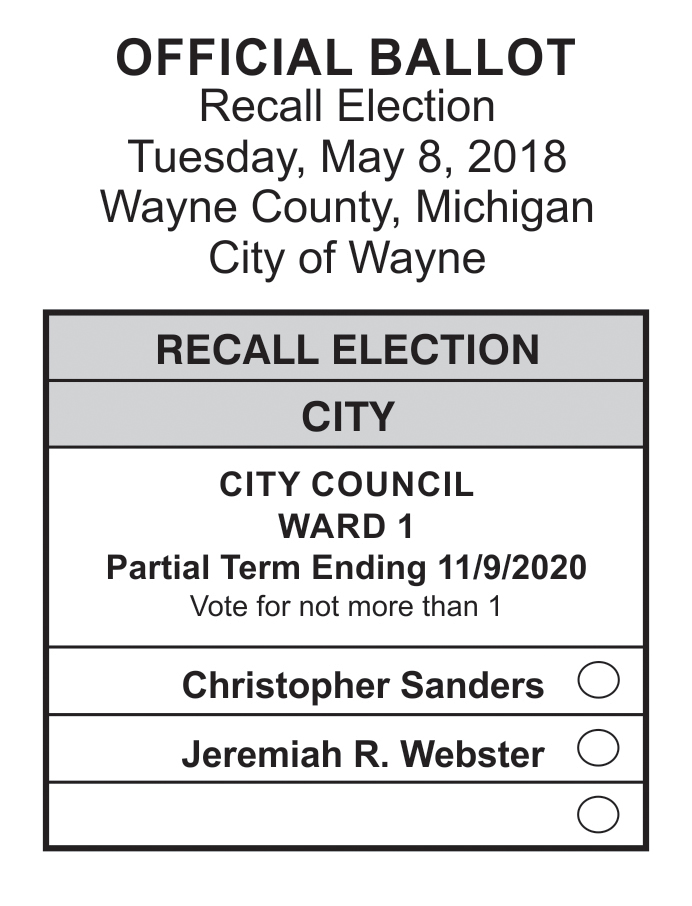 By Carolyn Marnon – The City of Wayne will be holding a special election on Tuesday, May 8 for the Recall of Ward 1 Councilman, Christopher Sanders.
According to Gregory P. Mahar, Director of Elections, Wayne County Clerk’s Office, election results are unofficial until the Wayne County Board of Canvassers certifies the election which may take up to 14 days after Election Day. A candidate cannot take the oath until the election is certified by the County Board of Canvassers and certification forwarded to the local clerk. Until the certification of the recall election results, the officer whose recall is sought continues to perform the duties of the office. The candidate receiving the highest number of certified votes in the recall election is elected for the remainder of the term.
What does this mean for the City of Wayne? On May 8, citizens will go to the polls and vote to elect Jeremiah Webster as the councilman to represent Ward 1 or to keep current City Councilman Christopher Sanders in office. Mr. Webster is currently an appointed councilman at large whose term will expire this November; he wishes to represent his ward, Ward 1, as a councilman.
After the election, the Wayne County Board of Canvassers has 14 days to certify the election results. During those 14 days or until the election is certified, whichever comes first, Councilman Sanders will continue to perform the duties of the office. Once certified, the results will be sent to Wayne City Clerk Matt Miller. If Mr. Webster receives the highest number of certified votes, he will be elected to serve the remainder of the Ward 1 term which expires in November 2020. If Councilman Sanders receives the highest number of certified votes, he will continue to serve as Ward 1 councilman until 2020.
If Councilman Sanders decides to resign from office now that the call for a recall election has been issued, the recall election would be cancelled. The vacancy would then be filled in accordance with existing law. If Councilman Sanders is recalled, he cannot be appointed to fill a vacancy in an elective office in the City of Wayne for the duration of the term of office that he ordinarily would have served. After the filing of a recall petition that has been circulated and after conducting a recall election, no further recall petition shall be filed against the same incumbent of that office during the remainder of the unexpired term.
If you are unable to vote in person on the recall election day, you can make a request in writing to the election official responsible for administering the election. The written request may be on a preprinted application form supplied by your city/township, in a letter or on a postcard. A written request must include a statutory reason why you will be eligible to receive an absentee ballot and your signature. Call your city/township clerk and ask for an absent voter’s ballot application. You may vote absentee if you are registered to vote and are 60 years of age or more, unable to vote without assistance, expect to be absent from your community for the entire time the polls are open, are in jail awaiting arraignment or trial, have been appointed to work as an election inspector in a precinct outside of your precinct of residence or unable to attend the polls due to religious beliefs.
The City of Wayne City Clerk is Matt Miller. He can be reached at (734) 722-2204