Resident steps up to help make ventilators during crisis 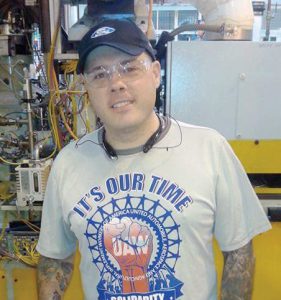 Brian Duka recounts his Rosie the Riveter moment building ventilators for the war on COVID-19.

By Carolyn Marnon – “I’ve been there 25 years, and I’ve always built transmissions,” said Wayne resident Brian Duka about his job at Ford Motor Company’s Livonia Transmission Plant. That all changed when COVID-19 became a pandemic across the nation, sending thousands to hospitals, struggling to breathe. Stay-at-Home orders were executed and businesses closed down, sending employees home for an unknown length of time.
Personal Protective Equipment inventories were low, hospitals were understaffed with front-line healthcare workers and those who did work, were overworked while still trying to protect themselves from the virus. Ventilators to help patients with the worst cases of COVID-19 were in short supply. Ford Motor Company saw a need and knew they could help. They would make ventilators.
“We got laid off because of COVID, and during the layoff, a good friend of mine I worked with at the plant died from COVID,” said Brian. When Ford asked for volunteers to go off of unemployment to make ventilators, Brian stepped up. While everyone else stayed home and got paid, Brian left the safety of his home to travel to Ford’s Rawsonville Plant in Ypsilanti where he was one of 500 paid volunteer UAW-represented employees that staffed the round-the-clock operation during one of three shifts.
According to Brian, Ford sent representatives to Melbourne, Florida, where Airon Corporation produces fully-pneumatic ventilators. No batteries or electrical power are needed; they operate on air pressure. He says it takes two people one day to make an A-E ventilator at Airon. Ford was able to reconfigure the production process whereby the volunteers, whether hourly or salary, “came together as one” to make 200 ventilators per day. “It was really neat the way they did it,” Brian raved.
Brian likens his role to a new version of Rosie the Riveter. “Each generation has to do their part, and I felt this was my part for my generation. I felt honored to go do that. Everybody there had a different story. Everyone went for someone they knew.” The production line was set up so any employee could do any job. Brian says there were short videos on a display next to each workstation that showed the employee at that station exactly what to do.
Project Apollo, the code-name given to the partnership between Ford, GE’s healthcare unit and 3M to produce the necessary ventilators, was, according to Reuters.com, so named for “the Apollo 13 launch in 1970 when a lunar landing was aborted after an oxygen tank failed two days into the mission, forcing the astronauts to improvise a fix.” After an April start, Ford expected to make 50,000 ventilators in the first 100 days and then 30,000 a month, as needed.
After working six weeks in Rawsonville where his job was to troubleshoot any ventilators that were not working properly, Brian has returned to his regular job at the Livonia plant. He says the majority of the people now working to build the ventilators are people that have been hired off the street so the Ford employees could get back to work.
“It was a great collaborative effort by everybody,” Brian said. “It was an honor every day to be a part of that.”