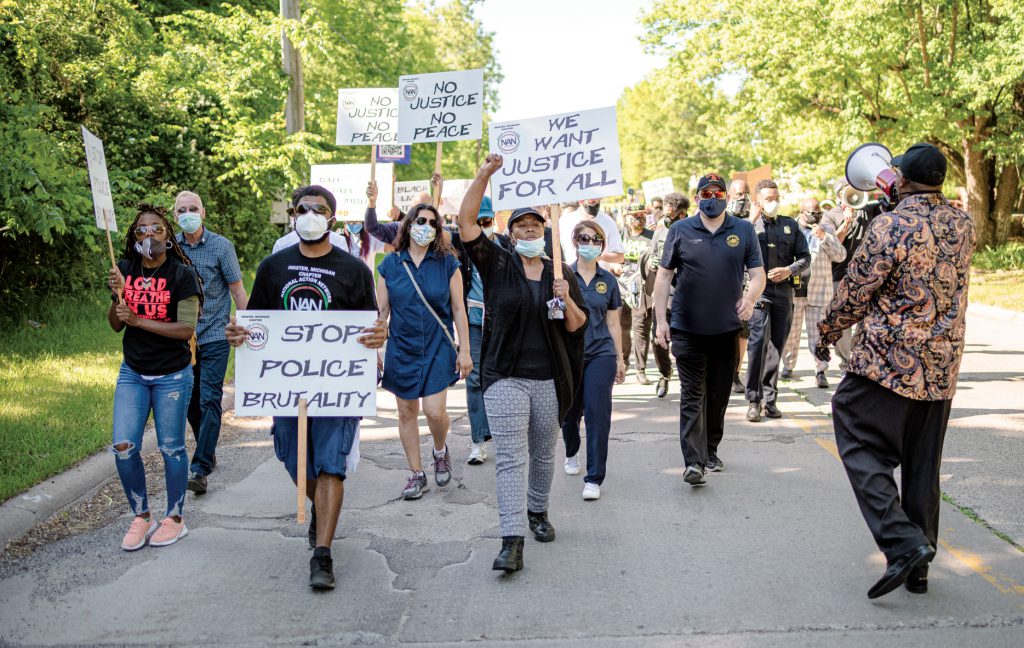 The peaceful prayer walk with community leaders and protesters on their way to Attwood Park in Wayne. Photo by Ryan Wright

By Carolyn Marnon – “Hands up!” yelled the lady with the bullhorn.
“Don’t shoot!” came the reply from the dozens of walkers in her immediate vicinity.
This was the scene several weeks ago as the Black Lives Matter Prayer Walk meandered its way along the streets from Burning Bush International Ministries on Annapolis Rd in Westland to Attwood Park in Wayne, drawing hundreds of people along with them. Whether they came out of their houses to see what was happening in their neighborhood, riding their bicycles down the street, or already out for a summer evening walk, people joined their Black neighbors in this peaceful protest proclaiming that Black Lives Matter.
“What do we want?” “Justice!” “When do we want it?” “Now!”
“Hey hey, ho ho. These racist cops have got to go.”
“Some young people had been approaching the Bishop saying they wanted their voices to be heard,” said Darcel Brown, a member of Burning Bush. Not wanting the church to be silent amongst all the protests and upheaval ignited by the most recent killing of George Floyd, a Black man in Minneapolis, Minnesota who died after a police officer knelt on his throat for over eight minutes while George struggled to tell him he couldn’t breathe, Bishop Shelby decided to have a Prayer Walk for peace and equality “to be sure the church wasn’t silent on the issue.”
Darcel was one of the members instrumental in organizing the Prayer Walk. Over 300 people were invited, including elected officials. Everyone who was invited was supportive of the event, said Darcel, even if they were not able to attend because of a scheduling conflict.
“My skin is not a threat!” 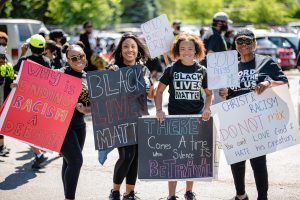 Protesters display their signs before the march into Wayne. Photo by Ryan Wright

“The inspiration (for the prayer walk) is centered around the Black Lives movement especially as it relates to what happened to George Floyd,” said Bishop Shelby. “Youth and millennials were getting involved in protesting. They were encouraged to speak their voice. This was an opportunity to protest in what I feel is the right way—a peaceful protest. As Christians, we can protest and speak aloud about injustice but still let our light shine as Christians.”
The sign reads “There Comes a Time When Silence is Betrayal.”
“We would have been happy with 200 (people attending) when it was planned. After all the pieces were put together, we had nearly 1500 people in the march,” said Bishop Shelby. He said the sanctuary at Burning Bush seats 1300 people. “I know what 1200-1300 looks like from the sanctuary. “The march was so long at one time, it was all the way down Van Born and Merriman.”
Darcel pauses for a moment. “I was one of the organizers because it took a whole team to put this together. One of the most gratifying moments was just seeing all of the people who came out to support us who were of different ethnic backgrounds and color–Black, White, Arab, elected officials, promoting peace and equality peacefully.”
What did Bishop Shelby think was the most gratifying moment of the event? He replied “Just the outpouring of support. To have the mayors of all four cities, that is Westland, Romulus, Inkster and Wayne. To have them come march with us. To have the four police chiefs. To have the support of the Wayne County police department. To have politicians.…It was a collective effort of overall support.”
The Black Lives Matter Prayer Walk was led by two people carrying a banner with photos of George Floyd and Breonna Taylor, a 26-year old African American who was shot by police in Louisville in March. The banner read “In Defense of Black Lives.” The parade of peaceful protesters included signs that read “Color is not a Crime,” “Why is Ending Racism a Debate?” “Racism is the Real Pandemic,” “My Weapon is Prayer,” and perhaps the most poignant sign “It Could’ve Been Me…My Dad…Your Son…You.”
All ages participated in the walk. Although the walkers were predominately Black, there were other races mixed in. Police from Wayne, Westland, Inkster, Romulus and Detroit walked in solidarity with the community. Westland Police Chief Jeff Jedrusik spoke to the crowd assembled for the walk.
“Community partnership is how we are going to move forward and how we are going to have to focus on getting beyond all of this.” He said that just like in any profession, bad people find a way to infiltrate a system and that it’s the police chief’s job to get rid of those people. “Nobody dislikes a bad policeman more than the good ones do. They tarnish our reputation, and they ruin our community’s trust.” Chief Jedrusik closed his comments by saying that his goal and that of law enforcement throughout the Wayne County area is to be a model for the nation to follow in policing. 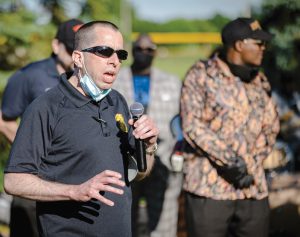 Wayne Police Chief Ryan Strong told the gathering at Attwood Park, “I’ve been in law enforcement for 21 years. It’s my life’s work. I love the job. I have no words for how painful that was to see that (referring to the George Floyd video.) I just want everyone here to know that the type of hatred and violence that we saw from those former officers now incarcerated does not represent the policies, practices or spirit of the Wayne police department. “We need leadership in the churches, leadership in the community. We need leadership in law enforcement. We need leadership in all levels of government, local, state and federal. I am here to give you my word that I’m going to do my part as police chief of the Wayne police department. I just hope that whenever my time comes” Chief Strong asserted, “we don’t need a Black Lives Matter movement.”
“We need to change mentalities,” stressed Bishop Shelby, not just policies. “The way that people see people like you and I, that has to be changed,” he told the gathered crowd.
Wayne Mayor John Rhaesa shared a story of his Black friend who had won a boxing championship in New York City. They were all trying to get to his victory party. No cab would stop for the group. The Black people in the group stepped away while Mayor Rhaesa was able to get a cab to stop. The friends all rushed into the cab and they went on to the party. Racism exists.
Mayor Rhaesa ended his remarks with a reference to the Mandisa song with lyrics of We all bleed the same. “We have to love each other! …Together, we can be the change.”

Resident steps up to help make ventilators during crisis