The train comes to Wayne 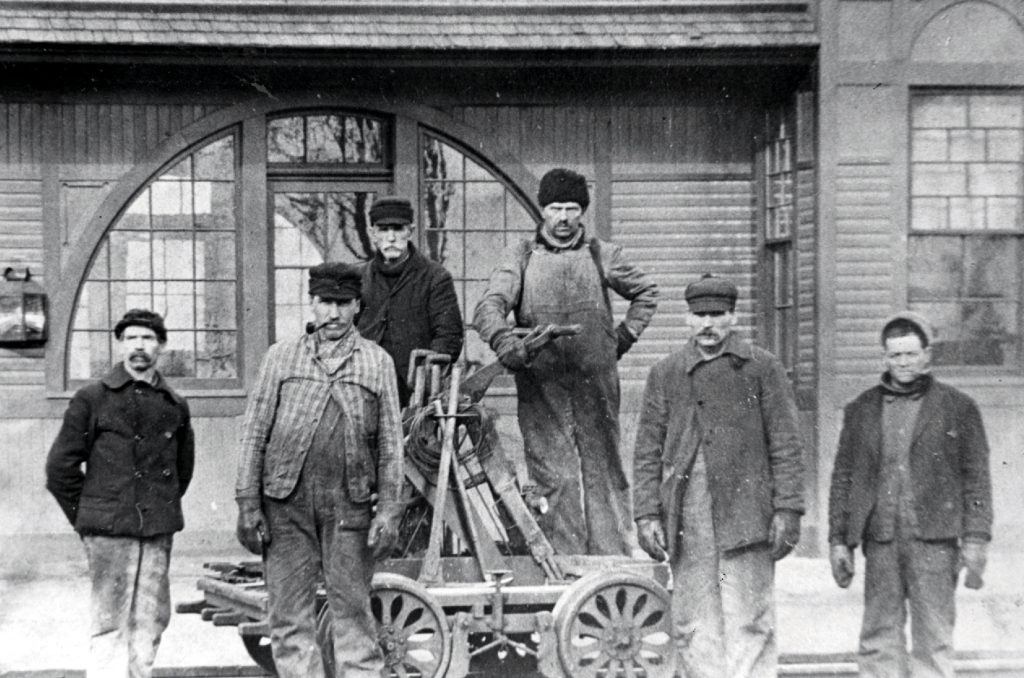 The Wayne section crew on the MCRR. Charles Goudy is second from left.

By Darlene Hawley – Wherever you live in Wayne, you are aware of the trains. You can hear their whistle and the clickety clack of their wheels on the rails at all times of the day and night. The Rouge River, which flows through our town, is especially helpful in carrying the train sounds from one end of town to the other and beyond. But there was a time when there were no trains or tracks anywhere in our state or country.
Historians tell us a basic form of railway was used as long ago as 600 BC. It was called a “rutway” and existed in ancient Greece and Roman times. It was important as a ship trackway and was called Diolkos which crossed the Isthmus of Corinth. It faded from historical records after 650 years. During the 16th and 17th centuries, hand propelled mining tubs were used in Europe to carry coal in mines. The first overground railroad in England had wooden rails, were horse drawn and were used in mining. In 1698 Thomas Savery built the first steam pump which lead to the development of the steam engine. In 1804 the first steam locomotive was invented. In 1828 the Baltimore and Ohio Railroad laid 23 miles of tracks and was known as the first public railroad in the U.S. The steam locomotive used was called Tom Thumb. Soon rails were being laid across the country to move goods and people. In 1865 the Pullman sleeping cars were introduced for long distance travelers.
With that bit of history, we look at the impact rail service had on our community. In 1836 a road was “grubbed” from Detroit to Ypsilanti for the Detroit & St. Joseph R.R. Prior to that time, Michigan Avenue was the primary road for all traffic of people, horses, wagons, buggies and stage coaches. Trains were bound to change everything. In 1837 the government bought the rail line and changed the name to the Michigan Central. It was wet and boggy in this area and the cost to build the rails was $3,200 per mile, a huge sum for the time. When it was completed it was considered to be a marvel to the twelve families who lived in the area at that time. The first trip from Detroit to Ypsilanti took place in 1838 and the fare was $1.50. In 1930 the Michigan Central became the New York Central and in 1968 was changed to Penn Central.
Over time more and more railroads were built and connected to this line, producing a large rail network across Michigan and the entire country. In 1871 The Holly, Wayne and Monroe railroad was built west of town. It later became the Pere Marquette. The new railroad connecting with the Michigan Central, gave Wayne a new importance. Detroit residents came out to Wayne and changed to the Pere Marquette to go north to Plymouth and Northville and south toward Monroe. After 1875 the Pere Marquette was changed to the B&O and then the C&O.
The Michigan Central depot was located between the tracks of the railroad. It was a two story white frame building and was also a residence for the station agent, Harvey S. Coleburn who served for many years. The Coleburns were once shaken up when an engine left the track and ploughed into the station house. The depot was an interesting building. The roof on the north side extended two or three feet and was supported by iron swans. It was later moved west to Sophia Street and was bought by Charles Attwood when he acquired the property to enlarge his Unistrut Company. The swans disappeared when the building was razed.
The Wayne depot was built in 1872 to handle the increased passenger traffic coming through the area. The building had a waiting room as well as well as railroad offices and freight storage. In 1924 it was removed after over 50 years of use. It was located on the north side of the railroad tracks behind the shopping center that now houses the Jimmy Johns restaurant.
The town of Wayne had first developed on the old Chicago Road (Michigan Avenue), then moved to the railroad as it assumed greater importance in transportation. With the coming of the automobile, however, the center of town shifted once again to the highway at the intersection of what is now known as Michigan Avenue and Wayne Road. The importance of the railroad was noted in the “Wayne Review” in December of 1878 when it was reported that “one day last week one of the most valuable trains that ever passed over the MCRR passed this station. Six cars loaded with $18,000,000 worth of silk -worm eggs, going to France.”
The railroad brought much to our community and helped it grow. There is lots more to learn about the impact it had on Wayne. Come in to our museum and see items like the hand bell the conductor used to announce the arrival of the train to Wayne station or the lantern used by railroad workers to signal the engineers and communicate in the dark. Learn the fascinating story of Railroad Jack. Your historical museum has many stories to share with you.

(Information for this article was taken from the book “The City of Wayne” by Wayne resident Valerie Latzman and displays in the Wayne Historical museum.)