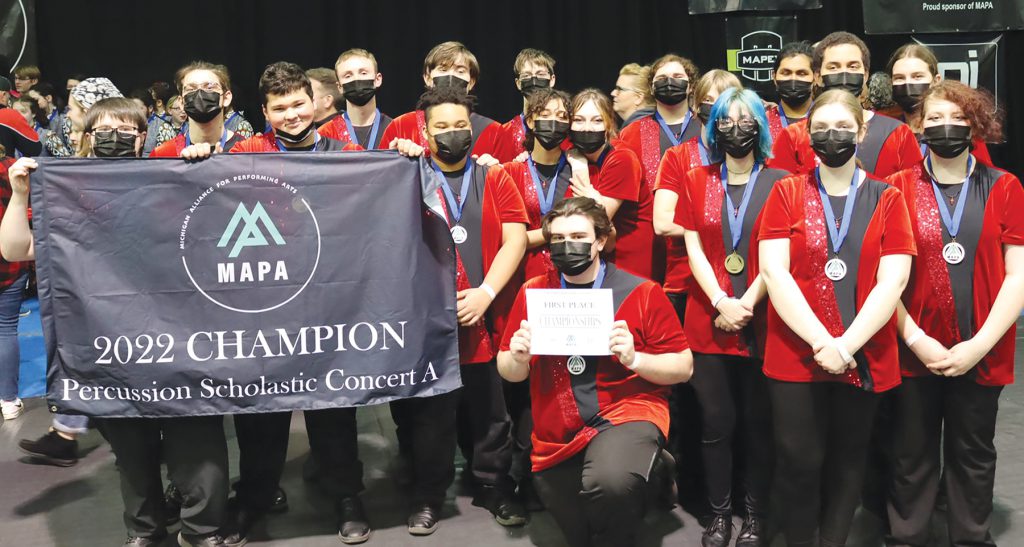 Wayne-Westland Winter Percussion’s 2022 season has come to a close! The ensemble competed at MAPA State Championships last month, scoring 81.50 in their last performance of Portraits of Spain.

By Sarah Shurge – The Wayne-Westland Winter Percussion’s 2022 season has come to a close.
Wayne-Westland Winter Percussion (WWWP) unveiled their 2022 program “Portraits of Spain” at the WGI Troy Regionals on Saturday, February 12th. The ensemble had two performances that day and received a score of 68.00 in prelims and 69.80 at finals.
Their next competition was Saturday, April 9th, at MAPA Lakeland. The members competed at MAPA State Championships and scored 81.50 for their last performance of Portraits of Spain.
Having a last performance at a competition like this was drastically different from how Wayne Memorial Percussion (WMP) finished their season in 2020.
In March 2020, Winter Guard International (WGI) and Michigan Color Guard Circuit (MCGC) canceled the remainder of the 2020 season due to COVID-19. So with last minute planning by Michael Wolf, WMHS Director of Bands and Orchestras, and Austin Mortiere, along with the permission from school administration, the final rehearsal of the season also included final run-throughs of the show in full uniform for family and friends who came out to watch.
For the last time in the 2020 season, WMP performed their “Legacies in Stone” show in the Old Gym at Wayne Memorial.
At the end of the 2020 season, the WMP was still four-time defending State Champions with two consecutive top ten finishes at world competition.
Fast forward to April 2022, and Wayne Memorial High School has been selected as one of the 80 schools that have received the Support Music Merit Award from the National Association of Music Merchants (NAMM).
This award acknowledges an individual school for its commitment to music education. It is a “school-only” distinction awarded as part of the Best Communities for Music Education program.
Wayne Memorial is one of three schools in Michigan to receive this particular award.
Huge congratulations to Director Wolf and all of his students on their hard work and dedication to music, no matter the situation.