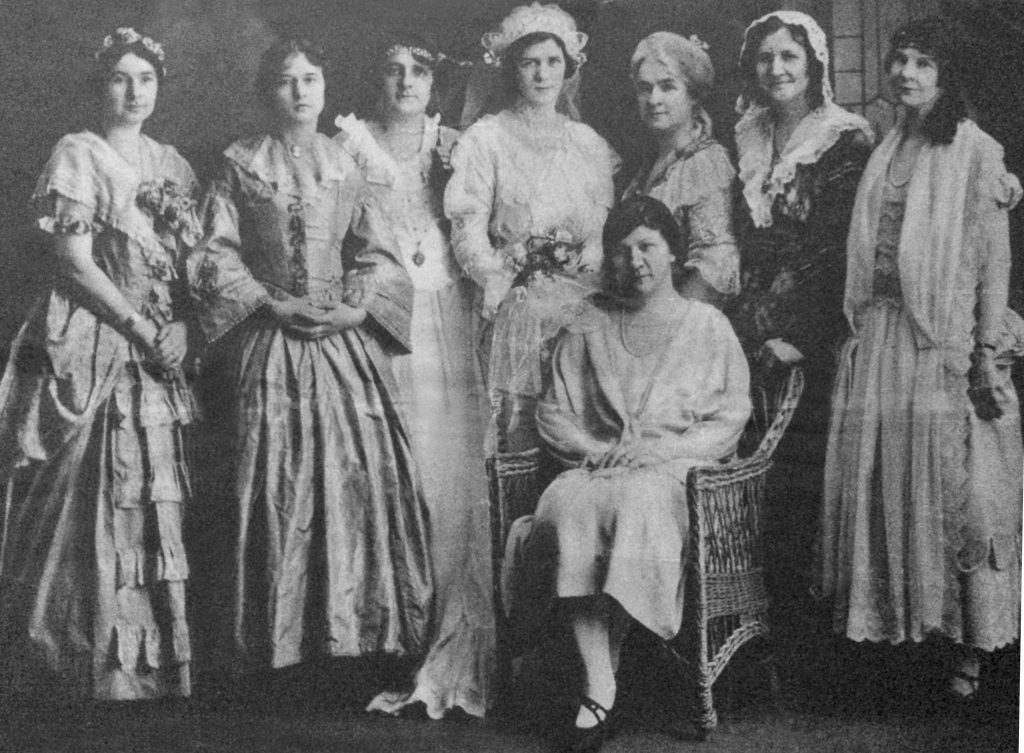 In 1926, a group of women from the Wayne Ladies’ Literary Club presented a play titled “Mrs. Coolidge, Gives a Tea” with each of the women dressed in period costumes of a president’s wife.

Darlene Hawley – Last week, the Ladies’ Literary Club of Wayne celebrated their 120th year of  meeting and offering programs to women of our community and surrounding communities.  A dinner meeting was held at Karl’s Cabin in Plymouth to begin this 120th year and to review the history of this club that has been active in our community for so many years.   Today, the club has 52  members who meet monthly to enjoy meetings on a variety of topics including book reviews, speakers, crafts, plays, concerts and outings to name a few.  They also continue the long tradition of raising funds to offer scholarships to local young women from Wayne Memorial and John Glenn.
The club was organized in 1896 by a small group of women in Wayne whose original mission statement stated “ home and society demanded of the women of today the broadest culture, and being well assured that our usefulness and enjoyment will be increased by such culture, believe also that the interchange of thoughts and a unity of purpose will stimulate our mental growth”.  They therefore united themselves “for the sole purpose of study and mental improvement.”  The 24 women who were the original members were women who spent their lives caring for their home, husband and children.  Cooking, cleaning, sewing, gardening and caring for their many children filled their days.  Most often, they did not have the opportunity to go to school or to prepare for a career outside the home.  Literary Club gave them the chance to learn about the world they lived in by studying history, geography, music, authors and many other topics.  They met weekly in each others homes and brought their pencils and paper with them to take notes and do their “lessons”.  They took turns preparing and presenting the programs.  They loved to hold debates on the issues of the day.  (Some of the topics they debated were; “ Should  suffrage be given to women?”, “Are Clubs detrimental to the home?”, “Should bachelors be taxed to support unmarried women?” “The Skyscraper, is it necessary?”   They also wrote poetry which they read at club meetings and often had members sing or play instruments after they completed their studies.  Refreshments were served on their best linens and china and silver tea sets were used.  Over the history of the Literary Club, members of every decade enjoyed putting on plays.  In 1926 several women presented a playlet entitled “Mrs. Coolidge Gives a Tea”.  It was held at the home of Mrs. George Stellwagen.  (Some well known names in early Wayne such as Stellwagen, O’Brien, Coville, and Truesdell are found listed as participants in this play. Some of the descendants of these women live and are active in our community today.)
Over the years, Literary Club became very social and held “publics” or receptions on New Years Eve.  They also held Valentine parties in February.  Many townspeople were anxious to receive invitations to these highly popular events.  In later years they became a service club.  Membership  had grown and the desire to help their community became an important part of their outreach.  They collected food, medicine, clothing and household items to send to northern Michigan during the devastating forest fires in 1908.    They made bandages during the Civil War and sent the largest shipment of medical supplies from Wayne to Belgium during World War II.  They supported the Boy Scouts and the Girl Scouts and sewed clothing for needy children. They held meetings on issues of the day and invited other clubs to join them in helping solve problems facing society.  The Humane Society came from one of these meetings.  They invited speakers from all over the state and across the country to enlighten them  and the community on various topics.
It is difficult to acknowledge all of the contributions to the women of our community as well as the community itself that this club has made over the past 120 years.  It is also amazing that the club continues when many organizations have dwindled in size or ceased to exist.  Maybe their motto, a quote from Shakespeare,  which was stated in their earliest records of 1896 says it all, “Tis well to be amused, but when amusement does instruction bring, ’tis better”.  Maybe that combination keeps them going!

The bells of early Wayne