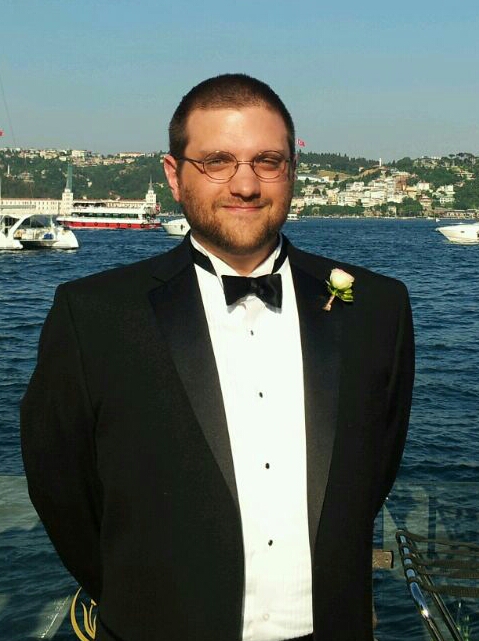 By Dee Ryan – A big welcome to Steven McGladdery.  He’s the new Co-Director of the Wayne Library.  Steve started working on July 1st, and has been working 20 hours a week.
Paulette Medvecky and the staff at the Library have been taking the new Co-Director around our city and introducing him to as many people as possible.
Steve McGladdery has a B A from Grand Valley State, where he majored in Psychology.  At Wayne State University he earned his Master of Library and Information Science degree.
He has been a Librarian at the Wixom Library and his duties were varied—Adult/Youth Reference Service—Computer Assistance, Programming, Collection Development, and Book Club.
As a substitute librarian at Baldwin Public Library in Birmingham, he once again did computer assistance, plus research projects.  He was also a library assistant for ITT Service in Canton, Michigan.
Mr. McGladdery’s additional work background includes The Home Depot -customer service—freight flow/organization, sales and loss prevention.
He worked as sales and receiving associate at Bed Bath & Beyond where once again his work was varied.  He was in sales, customer service; organized and scheduled deliveries; and also freight flow and loss prevention.
Steve is married. His wife teaches school in Dearborn—they live in Westland.
Steven McGladdery’s career target —“I seek a challenging library position with strong focus on user relations and implantation of new technologies.”
Once again, we say “Welcome Mr. McG.”
Sue and Al Damitio kindly sent me a wonderful run down of their trip to London and France. Their oldest granddaughter, Bridgette, newly graduated from Wayne Memorial High School, joined them.  In London they stayed with friends, who had recently retired and returned to England, after 20 years in Michigan.
Each morning they took the bus, train, or underground to visit many of the historical sights.  At Hampton Court, Henry Vlll’s Palace, actors in period costumes performed as if they were living in medieval times.
They found the Tower of London fascinating, with the Beefeaters giving tours and the ravens at home.  The Crown Jewels were stunning, but “over the top to the point of being gaudy.”
They saw the Tower Bridge and took a ride on the “London Eye” (a gigantic Ferris wheel.)  They stayed 6 days in London, and each day was sunny.  The previous week it had rained every day, which is usual for London.
Then it was on to Calais, France via the Chunnel.  They were met by Marcel and Rose, whose two sons stayed with the Damitios as exchange students. They all went to Bruges, Belgium (a beautiful medieval city) and to see an outstanding museum in the Coupole. This was the Nazi site for launching V1 and V2 rockets. Their friends also drove them to Rouen, where Joan of Arc was tried and burned at the stake; and to Giverney to see Monet’s garden and house. (It was gorgeous and very crowded) They then drove into Paris.
They spent five days in Paris and went to Sunday Mass at Notre Dame Cathedral.  They went to the Louvre, to the top of the Eiffel Tower, took a boat ride down the Seine, and had lunch at Jean-Paul’s Chocolatier. They spent an hour in the Montmarte Art District, where Bridgette posed for an artist who drew her picture.  Their highlight in Paris was having dinner with Albert’s cousin, Gilles, and his family.
They left Paris on the TGV (a very fast train), and went south to Lyon. Their very first exchange student, Cedric, drove them to his house in Annonay, they then toured the Ardeche. There are many ancient walled cities and wonderful gorges and landscapes to see in the Ardeche region. The Chauvet Cave with prehistoric drawings from 32,000 years ago can be found there. They also took a trip to Orange and Avignon, where they saw the old Papal Palace, and a Roman Amphitheatre, still in use today.
After returning to Lyon and seeing the sights they returned on the TGV for their non-stop flight to Wayne. Now it’s back to work—City Council for Albert and Ladies Literary duties for Sue.  Thanks again for the detailed and enjoyable summary of your trip to London and France.

Don’t forget this date…August 16th from 11a.m. to 4p.m.  That’s the day you and your family can play golf at the Library. That’s the day our Library will be transformed into an 18-hole mini golf course.
Your ticket will purchase one golf ball and one putter.  You’ll then play the game of golf throughout the library.
Student tickets (ages 6-18) are $3.00.  Adult tickets (ages 18+) are $5.00, and a family ticket (up to 6 people) is $15.00. You can also eat lunch at the 19th hole.  There’ll be hot dogs, chips, pop, and candy.  We hope to see you there. It’s a fun fundraiser, with all the proceeds going to help our Wayne Library.