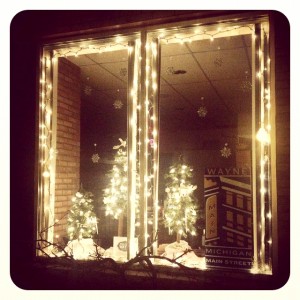 New Office Location
Last month, Wayne Main Street relocated their office to the Wayne Activity and Banquet Center Building located at 35000 Sims Street. The move was necessary as the organization continues to grow. Now boasting two graduate student interns from Eastern Michigan University along with a need for more storage space, this location has plenty of room and brings life back to a once under-utilized building. Wayne Main Street has an open door policy for anyone interested in becoming more involved in their efforts to revitalize Downtown Wayne. Feel free to stop by and visit during open office hours: Monday – Friday 1:30 PM – 3:30 PM or call (734) 629-6822 to schedule an appointment.

Holiday Window Display Contest
Wayne Main Street would like to announce the 1st Annual Holiday Window Display Contest.  Working with businesses located in the Main Street district, this effort to light up Downtown Wayne for the holidays encourages stores to decorate their windows to promote downtown.
This year’s theme is “An Old-Fashioned Christmas.”
Wayne Main Street will have a team of volunteer judges walking the downtown area on the night of the Rotary Holiday Parade of Lights: Friday, December 5.  Judges will select the “Judge’s Choice” award winner and the winner will be announced and receive a plaque after the parade at the State Wayne Theater.
After the Rotary Holiday Parade, Wayne Main Street will prepare a Facebook campaign displaying all entries enabling the public to view and vote on their favorite Window Display.  The winning entry will be awarded the “People’s Choice” prize and given a special plaque. To participate in the voting campaign, “Like” Wayne Main Street on Facebook by visiting www.facebook.com/WayneMainStreet.

Small Business Saturday Recap
On November 29th Wayne Main Street hosted a successful retail shopping event in Downtown Wayne in conjunction with the national Small Business Saturday campaign. The day started at Nick’s Coney Island where shoppers picked up their free Shop Small tote bag and shopping Passport. After breakfast, shoppers were encouraged to visit all 8 participating retail businesses to obtain a “stamp” for their passports. If shoppers got all 8 stamps plus spent money at 3 of the stores they were entered to win a door prize that consisted of items and gift cards donated by each of the participating businesses. Over 50 shoppers came out for the event and spent over $3,000 dollars on holiday gifts. Wayne Main Street would like to thank all who participated in the event and congratulate the winner of the door prize drawing – Theodora Brooks!

Interns
Wayne Main Street had two interns from Eastern Michigan University’s Historic Preservation Master’s program this semester and will be sad to see them go! Ashleigh Czapek and Sophia Kloc have been tremendous assets to the Main Street effort during their time spent in Wayne. Both students worked effortlessly to assist the Executive Director with daily administrative tasks including social media management, database entry, press release writing, and more. Last month, Ashleigh Czapek wrote an article showcasing the beautiful State Wayne Theater and submitted it to be published in the newsletter of the Detroit Area Art Deco Society. Once the newsletter becomes available, it will be shared on the Wayne Main Street website (www.downtownwayne.org). Sophia Kloc has been working tirelessly doing research on the Wayne Post Office building and received approval from the Wayne Main Street Board of Directors to apply for a Michigan Historic Marker to be placed in front of the building to raise awareness of its historic significance. The entire community sends a sincere “thank you” to these young ladies for all of the hard work they did over the past four months and wish them well on their professional journeys!