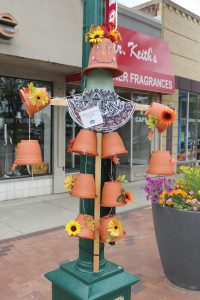 By Carolyn Marnon – It’s time for the Annual Scarecrow Show in downtown Wayne. Individuals and groups purchased a t-frame from Wayne Main Street and have spent the past month or two (or maybe just the past few days) creating a scarecrow that advertises their business or a cause they believe in, a well-known character or some delightfully made-up concoction. Remember the scarecrow that was blowing in the wind last year? 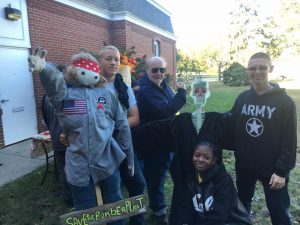 The Scarecrow Show will be prancing up and down Wayne Road and Michigan Avenue West until November 3. Community members are encouraged to visit each of the more than 70 installations while exploring Wayne’s historic downtown. Residents and visitors will have the opportunity to vote on their favorite Scarecrows later this month. Wayne Main Street is hosting a Voting Contest & Reception in Derby’s Alley (35005 W. Michigan Ave) on Thursday, October 19, from 3:00-7:00 p.m. The 2017 Scarecrow Contest Winners will be announced at this event.
Launched by Wayne Main Street in 2012, Wayne’s Scarecrow Show has become a signature event for Downtown Wayne. Angie Jarman, Wayne Main Street Committee Member and Scarecrow Project Manager, comments “Scarecrows is a great community building activity. Our goal is to get everyone in Wayne excited and involved in the things that are happening in Downtown Wayne”. Each year this project draws thousands of visitors to Downtown to view the over 70 scarecrows installed throughout Wayne’s commercial district.
Enjoy the fall weather and take a little trip around Wayne to see the scarecrows. It’s a fun and relaxing activity that can be shared by all.

By Courtney Conover – At the age of 45, my memory isn’t horrible, but it’s been better. If I didn’t write it down, I would be liable of forgetting that I had signed up to bring the paper plate...
View on Facebook
· Share